Blue is Green and Red is too: The Political Divide on Environmental Policy Support 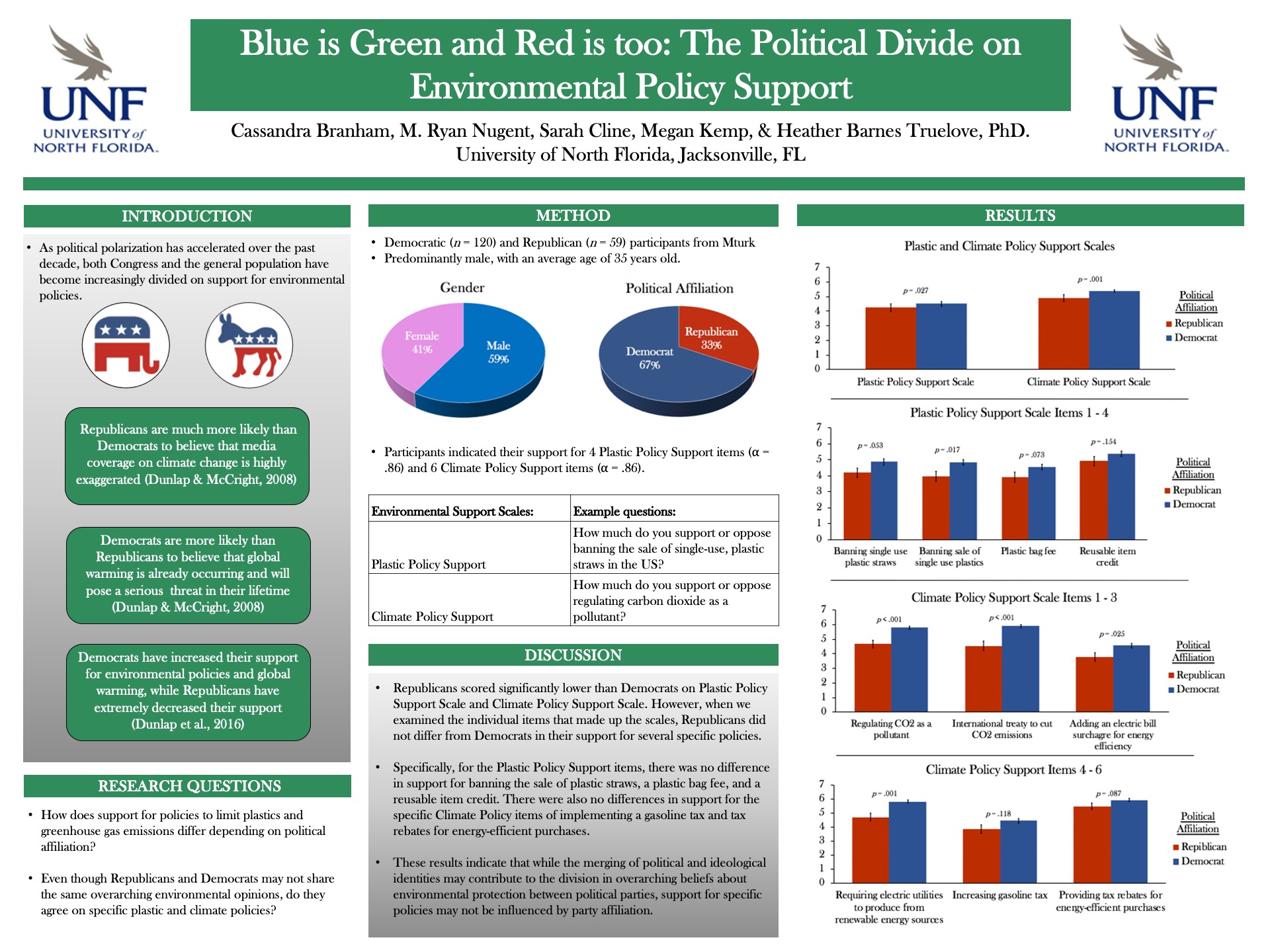 As political polarization has accelerated over the past decade, both Congress and the general population have become increasingly divided on policies for environmental protection. This division may be due to the recent trend of political affiliation being treated as a social identity from which to base ideological beliefs about the existence of climate change as well as the need for environmental programs targeting plastic consumption (Dunlap et al., 2016). We hypothesized that participants that classified themselves as Democrats would show more support for climate and plastic policies than participants that classified themselves as Republicans. We recruited a sample of 251 participants from MTurk. 179 participants classified themselves as either Democrat (n = 120) or Republican (n = 59) and were examined in this study. The study sample was predominantly male (59%), with an average age of 35 years old. Participants indicated their support for 4 items relating to Plastic Policy Support (α = .86) and 6 items relating to Climate Policy Support (α = .86). Republicans scored significantly lower than Democrats on Plastic Policy Support Score (p = .027) and Climate Policy Support Scale (p = .001). However, when we examined the individual items that made up the scales, Republicans did not differ from Democrats in their support for several specific policies. These results indicate that while political identity may contribute to the division in beliefs about overall climate and plastic policies, support for policies targeting specific pro-environmental policies may not be influenced by party affiliation.

Over the past decade, political polarization between Democrats and Republicans has dramatically accelerated regarding many social issues. In this study, we were specifically interested in looking at the issue of environmental protection and differences in opinions between both political parties.

Past research has shown that Democrats are much more responsive to environmental media coverage than Republicans, who instead tend to believe that the media highly exaggerates climate change and its potential negative effects on the environment. Due to these differences in general opinion, Democrats have – over the years – increased their support for environmental protection efforts, while Republicans have decreased their support for such efforts.

Based on this previous research, these two questions came to mind:

First: How does general support for environmental protection efforts differ depending on political affiliation?
And Second: is this difference maintained when looking at specific plastic and climate policies rather than general environmental opinions?

When looking at both the Plastic Policy Scale and Climate Policy Scale, we found a significant difference between the responses of Democrats and Republicans, in that Democrats scored higher on both of these scales than Republicans. This greatly aligns with the current political trends regarding views on the environment, so this result is what we were generally expecting.

However, when we examined some of the items targeting specific pro-environmental policies in both scales, we found that Democrats and Republicans actually agreed on many specific policies.

There was not a significant difference between Democrats and Republicans in their responses to three of the four Plastic Policy Scale items, including banning single use plastic straws, and implementing both a plastic bag fee and a reusable item credit at stores and restaurants.

However, Democrats scored significantly higher than Republicans on banning the sale of single use plastics.

As for the Climate Policy Support Scale, Democrats and Republicans did not differ in their responses to two of the six items, including increasing the gasoline tax and providing tax rebates for energy efficient purchases. However, Democrats did score significantly higher than Republicans on regulating carbon dioxide as a pollutant, signing an international treaty to cut carbon dioxide emissions, adding an electric bill surcharge for energy efficiency, and requiring electric utilities to produce from renewable sources.

These results indicate that while the merging of political and ideological identities may contribute to the division in overarching beliefs about environmental protection between political parties, support for specific policies may not actually be influenced by party affiliation.

Republicans may appear to be more in favor for environmental protection when looking at their their support for specific policies rather than their general plastic and climate support.

PrevPreviousMeasuring cognitive control and reducing racial bias with fNIRS
NextPlastic bag reduction policies: What is the most effective approach?Next

3 thoughts on “Blue is Green and Red is too: The Political Divide on Environmental Policy Support”