Celebrities in Rehab: Who is more at risk? 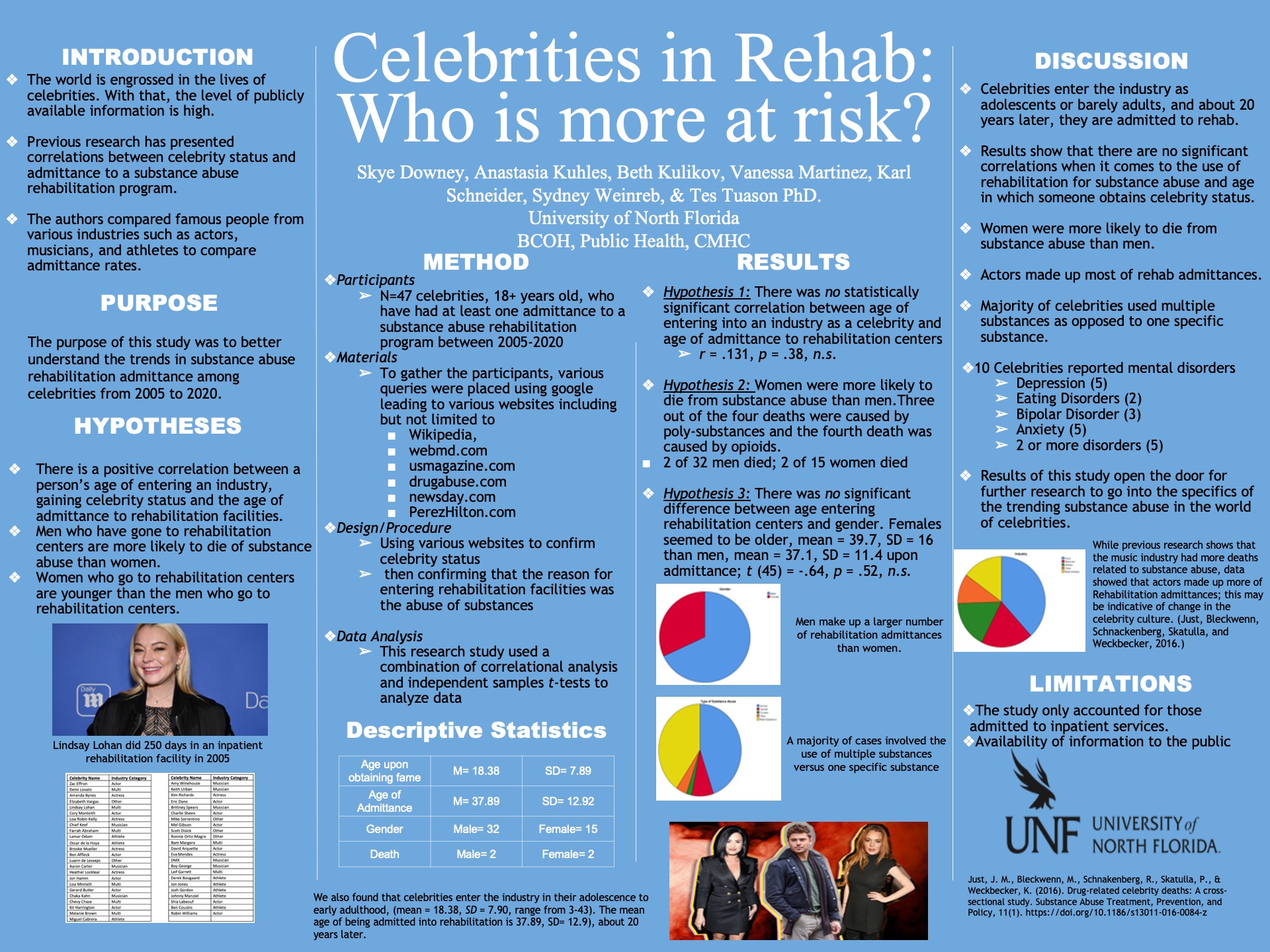 Does celebrity status make people more likely to need rehab? The purpose of the current study is to better understand the trends in substance abuse rehabilitation admittance among celebrities from 2005 to 2020. The authors became interested in the topic due to its myriad implications within the clinical mental health counseling field. Popular lore indicates a positive correlation between celebrity status and substance abuse. Previous studies have covered the predictive factors of celebrity downfall, but few have gone into specific trends among rehabilitation admittance. This mixed method review is designed to further look at the specific factors in celebrity status and substance use that may be indicative of future admittance. Using a phenomenological approach, this study analyzed n= 47 celebrities who were admitted to rehabilitation centers and the relationships between various factors including the type of industry, gender, age at admittance, type of substance, death related to substance abuse, and age the individuals entered their industries. Secondary data was collected from various publicly available sources. The data is entered and analyzed using Microsoft Excel and Statistical Package for Social Sciences (SPSS). Preliminary findings suggest that musicians have the highest rate of rehabilitation admittance among all celebrity industries, that the average age of celebrities at admission is early to mid-20’s, and that the average age that they become celebrities is early adolescence. These findings are relevant to understanding celebrities’ impact on the public and the need for awareness of the risks of their lifestyles on their mental and physical health as it relates to substance abuse.

Hello, I am Karl Schneider, a graduate student in the Clinical Mental Health Counseling Program at the University of North Florida.  On behalf of my classmates Skye Downey, Anastasia Kuhles, Beth Kulikov, Vanessa Martinez, Sydney Weinreb, and our Professor, Dr. Tes Tuason, I thank you for your interest in our research project, “Celebrities in Rehab:  Who is more at risk?”.

We wanted to understand more about the trends of celebrity admittance into substance abuse programs from 2005 through 2020.

We have three hypotheses:

We considered 47 celebrities, at least 18 years old, who were admitted at least once into a substance abuse rehabilitation facility between 2005 through 2020.  We gathered our data from queries through the Google search engine, which resulted in articles from websites such as Wikipedia, webmd, usmagizine, drugabuse, newsday, and PerezHilton.  We cross referenced websites to confirm celebrity status, and to verify that the admittance to the rehabilitation facility was for substance abuse issues.

We used a combination of correlational analysis and independent samples to analyze the data.

Of our sample population, the mean age at first achieving fame was 18.38 years old.  The mean age at admittance to a facility was 37.89 years old.  Gender showed 32 celebrities were male, and 15 female.  Four celebrities died of substance abuse during the time period, two male and two female.

Surprisingly, our first hypothesis proved wrong.  There was no statistically significant correlation between the age of entering into celebrity status and the age of admittance into a rehabilitation facility.

We also found our third hypothesis was in error.  There was no significant difference between age at entering rehabilitation facilities and gender.

Future research is indicated in several areas.  What happens in the twenty years between entry into a profession and the decision to go into rehabilitation?  Why are women celebrities more likely to die than men?  Why do actors make up most of the celebrities in rehabilitation?  Are there underlying mental health disorders in those celebrities that did not report any?

Our limitations:  We only looked at those celebrities who entered into in-patient rehabilitation.  Others may have received private treatment or used an out-patient program.  Finally, our data was only data that was generally available to the public.

While the study did not yield significant results as we had hoped, the descriptive statistics remain to be further investigated.

We hope you learned something  today–thank you!

PrevPreviousKnights of The Self-Efficacy Table. Taking Back the Table as a Family
NextReview on Autism Spectrum Disorder: Disclosure & IdentityNext

3 thoughts on “Celebrities in Rehab: Who is more at risk?”