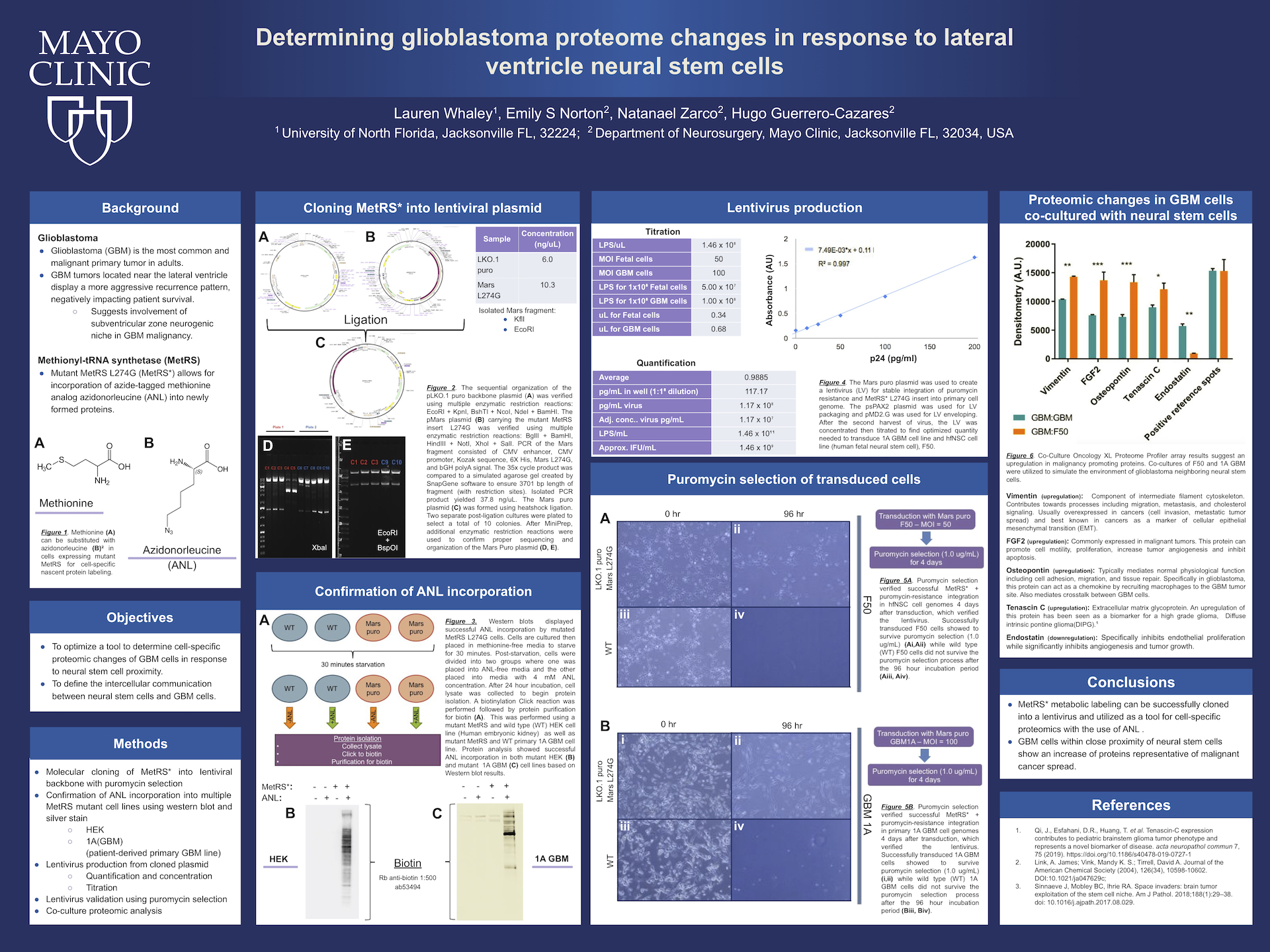 Glioblastoma (GBM) is the most common and malignant primary tumor in adults. When GBM tumors are located close to the lateral ventricle they display a more aggressive recurrence pattern and negatively impact patient survival. These findings suggest the involvement of the subventricular zone neurogenic niche in GBM malignancy. To define the inter-cellular communication between neural stem cells and GBM cells, we optimized a tool to determine cell-specific proteomic changes of GBM cells in response to neural stem cell proximity.

Co-cultures consisting of MetRS-transduced GBM and WT hfNSCs were used to simulate a similar environment of glioblastoma neighboring lateral ventricles. Proteome Profiler results showed a significant downregulation of an angiogenesis inhibitor and upregulation of malignancy promoting proteins in GBM1A. Going forward, this analysis method will be used for cell-specific proteomics in vivo.

Glioblastoma multiforme is considered one of the most aggressive cancer types characterized by fast growing tumors in the brain. This particularly malignant cancer makes up 16% of primary neoplasms of the brain and central nervous system.

Although glioblastoma can occur at any age or stage of life, the “median age” of GBM presenting itself occurs at 64 years old. Most people diagnosed with GBM have de novo or “primary” classifications of the disease meaning it presents itself without a known precursor. Individuals diagnosed with primary GBM have a worse prognosis than those with “secondary” GBM, classified by low-grade tumor(s) transforming into GBM over the course of time. After diagnosis the median survival of this disease lies around 1 year, with less than 5% of cases surviving past 5 years.

There are 2 models that serve as hypotheses describing how GBMs originate in the brain. The stochastic model shows all cells located in the GBM tumor harness a similar tumorigenic potential even though these cells may not activate this potential at the same time.
The hierarchal model supports only a rare subset of cells have the ability to generate new tumors due to significant proliferation capabilities, while the other tumor cells reach different differentiation stages including terminal differentiation.

After going beyond the “no new neuron” dogma, neogenesis of mature cells was found to be an ongoing process even throughout adult life. This process takes place in the dentate gyrus within the hippocampus region and the sub ventricular zone located between the lateral ventricle striatum parenchyma. This sub ventricular zone has been shown to be the largest neurogenic region in the adult mammalian brain.

GBM is seen to contain a subpopulation of cancer cells with stem-like characteristics, which includes self-renewal and multipotentiality properties. Like those in other renewing tissues, the population of undifferentiated, mitotically active cells found in the SVZ may function as a source of cells that could give rise to tumor stem cells. Specifically, some disruption of the regulatory mechanisms controlling self-renewal probably plays a role in the genesis of cancer initiating cells.

In this experiment, we optimized a tool to determine cell-specific proteome changes of GBM cells in response to neural stem cell proximity to define the inter-cellular communication between neural stem cells and GBM cells.

To determine these proteomic changes, we decided to utilize bio-orthogonal strategies as these methods can incorporate genetic manipulations effectively since chemical reporters are directly incorporated through the cell’s own machinery. In our case – the expression of a methionyl-tRNA synthetase MetRS bearing a point mutation which alters the amino acid- binding site (Mars L274G) allows for the incorporation of ANL into proteins.

To begin this experiment, we Initially attempted to construct a lentivirus carrying TdT tomato to eventually preform specific cell selection with the use of fluorophores. Instead we decided to construct the virus by coupling the mutated MetRS* (also know as MetRS L274G) with a resistance to puromycin.

The incorporation of ANL needed to be verified in cells bearing a mutated MetRS.
Four groups of cells (two being wild type Human embryonic kidney cells also known as HEK cells, and two being HEK cells bearing the mutant MetRS) were placed in methionine-free media for a 30 minute starvation period. Afterward one wild type and 1 mutant group were placed in media with ANL while the other wild type and mutant group where placed in media without ANL (these media weren’t altered further, meaning both contained typical methionine levels). After a 6 hour incubation, proteins were isolated by collecting cell lysate of each group, preforming a biotin Click-iT reaction, then purifying for biotin. We used biotin alkynes to covalently attach biotin in order to detect affinity-purified cell specific proteins.

Western blot and silver stain analysis showed the mutant MetRS group placed in ANL+ media to successfully incorporate ANL (by utilizing ANL in protein production) while the other 3 groups did not.

We began cloning the Mutant MetRS to continue towards producing a lentivirus.

We decided to put Mars L274G into a lentivirus as it would allow stable integration into genomes as well as the LV capabilities of efficiently labeling primary cells.

To begin with this step, 2 plasmids were ordered from Addgene:

and the pLKO.1 puro plasmid (serving as the backbone that also carries the puromycin resistance.

The aim was to ligate the two plasmids to create the Mars Puro product that will be utilized in the Lentivirus.

After preforming mini preps of each individual plasmid, enzymatic restriction assays were preformed to verify correct sequencing of pLKO.1 puro and pMarsL274G.

After verification, we conducted PCR of the Mars L274G fragment to verify proper length.

Both enzymatic restriction and PCR results were compared to simulated agarose gels created by SnapGene.

Once sequences and lengths were confirmed, ligation was preformed using heat shock then plated on 2 separate dishes.

Afterwards, we continued with Lentivirus production through quantification and concentration followed by titration.

MOIs, or Multiplicities of infection, were determined for patient derived primary GBM line, 1A, and primary human fetal neural stem cell line (hfNSC), F50. These MOIs were used to transduce both lines with our Mars Puro LV product.

After a 4 day period, the lentivirus appeared to be verified seeing as transduces cells survived the puromycin selection process while the wild type of each cell line did not survive.

(Slide 29)
After 48 hours, cultures were analyzed using a proteome profiler.

Of the proteins analyzed, some significant changes in regulation support that of malignant tumor growth.

Results showed an up-regulation of Vimentin. This protein has been observed to make up cytoskeleton intermediate filaments. Vimentin is also known for assisting cell migration, metastasis, and cholesterol signaling. It’s typically seen to be over- expressed in cancers showing metastatic tumor spread.

Fibroblast growth factor, or FGF2, also showed an up-regulation. While it promotes functions such as cell motility and proliferation, its also commonly expressed in malignant tumors as it can increase tumor angiogenesis and apoptosis inhibition.

Osteopontin appeared to be up-regulated. This protein plays a role in typical functions such cell adhesion and tissue repair. However, this protein has been observed to function like a chemokine by recruiting macrophages to tumors specifically in GBM cancers.

Extracellular matrix glycoprotein, Tenascin C, displayed up-regulation. An up- regulation of this protein has been studied as a biomarker of Diffuse intrinsic pontine glioma (also known as DIPG) which is classified as a high grade glioma.

The down regulation of endostatin still suggests proteomic changes favoring malignant tumor growth seeing as this protein inhibits endothelial proliferation as well as significantly inhibiting both angiogenesis and tumor growth.