Did That Just Happen? Sex Differences, Protectiveness, and Perceptions of Sexual Harassment 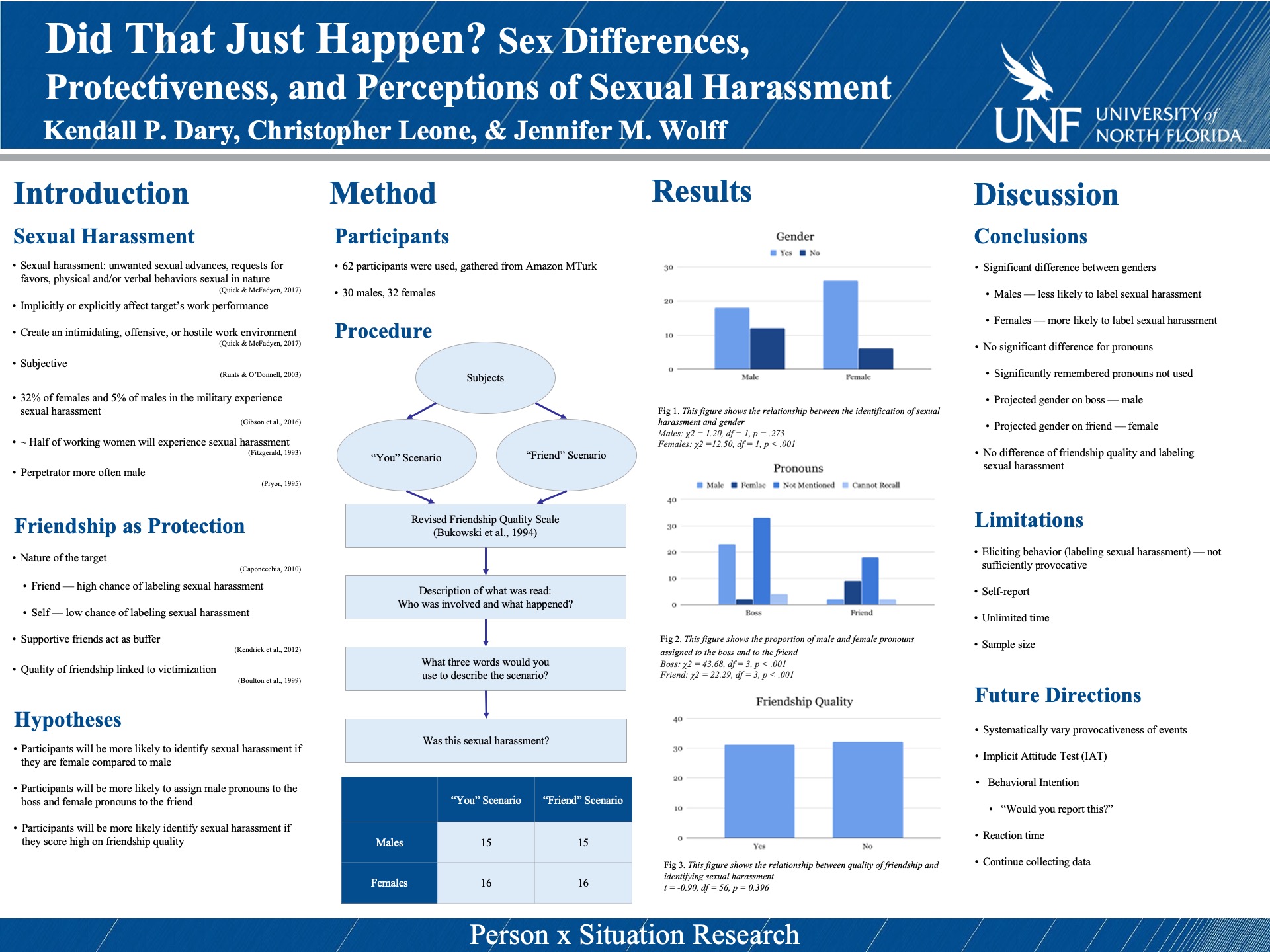 Sexual harassment (SH) is any unwanted sexual advance, request, or verbal/physical sexual behavior. It must explicitly/implicitly affect employment, interfere with work performance, and create an intimidating, hostile, or offensive atmosphere (Quick & McFadyen, 2017). SH can happen to anyone, but more frequently occurs to females and is perpetrated by men (Gibson et al., 2016; Pryor, 1995). Having a good quality friend has been linked to decreased victimization (Kendrick et al., 2012).

The current study looks at the interpretation and identification of SH. Based on the literature, the hypotheses are participants will more likely identify SH when (H1) they are female compared to male (Fitzgerald, 1993; Gibson et al., 2016) and (H2) they score high on friendship quality (Kendrick et al., 2012). It is also hypothesized (H3) that male pronouns will be assigned to the perpetrator and female pronouns will be assigned to the target (Pryor, 1995).

Participants were recruited from Amazon MTurk. Participants completed a demographic survey, read one of two scenarios, answered 4-5 questions about what they read, and then answered a 7-question friendship quality scale (Bukowski et al., 1994). In these scenarios, the target of harassment was either the participant or participant’s friend. After reading a scenario, participants were asked to (a) provide a summary of the event, (b) give three words to describe it, (c) decide if it is SH, (d) identify the perpetrator’s gender, and (e) identify the friends’ gender (if applicable). Data collection and preliminary analyses are ongoing.

Past research has found that the nature of the target is important when identifying sexual harassment. People are more likely to identify sexual harassment when it happens to a friend compared to themselves. This could be true because supportive friends act as a buffer against harassment and other forms of victimization, as does having a good quality friendship.

62 participants were gathered using Amazon MTurk with an almost equally split sample of 30 males and 32 females. When taking the survey, participants were randomly assigned to be in either the “You” scenario or the “Friend” scenario. Participants in the You scenario read about being at work when their boss appears behind them and places their hand low on the participant’s back. The participant makes it known they are uncomfortable by stiffening their back and making an uncomfortable face, but the boss does not stop. Participants in the Friend scenario read about being at work and watching the previously mentioned scenario occur to their coworker who is also one of their friends. An important part of these scenarios is that no gender pronouns were used to describe the boss or friend.

After reading their scenario, participants answered the 7 question Revised Friendship Quality Scale. These questions were on a 5-point scale (1 = Strongly Disagree and 5 = Strongly Agree) and asked participants how much they agreed with statements on how they would treat their friend. To get participants’ scores for the Revised Friendship Quality scale, their scores for all 7 questions were added up. Participants were asked questions about what they had read and whether what they read was sexual harassment or not. Participants were then asked the gender of the boss and, if applicable, the gender of the friend. Answer choices included Male, Female, Not mentioned, and Cannot recall.

To analyze the use of pronouns for the boss and friend, chi-square tests for equal proportions were run. The majority of participants correctly remembered that there were no gender pronouns used.

What do those results mean? Looking at the first analyses, it shows that there is a significant difference between genders and identifying sexual harassment. Females are significantly more likely to identify than not identify while there is no difference for males. Looking at the second analyses, participants accurately remembered that gender pronouns were not used. This does not support the hypothesis. Of those who did project a gender, you can see bosses were projected to be male and coworkers were projected to be females. This falls in line with what was hypothesized. The third analysis showed that there was no significant difference between friendship quality scores and labeling friendship quality. The average scores were almost identical.

There were some limitations to this study. One limitation could be that the scenarios were not strong enough, leading to less people labeling it as sexual harassment. Another limitation would be the format of the study. It was a self-report which could have led to participants not fully reading the questions or social desirability bias. Social desirability bias is when participants answer questions in a way they think will make them appear socially desirable. Participants also had unlimited time to take this survey which could have allowed them time to become distracted and not put their full focus on the task at hand. Sample size was also a limitation. There were only 62 participants in total which is low for this type of statistical design.

Future directions should take a look at these limitations. This could be done by systematically varying the provocativeness of the events. What this means is that some participants would read a mild event and others would read a more serious event. An Implicit Attitude Test could be used to show any implicit associations someone holds towards perpetrators and targets of sexual harassment. Behavioral Intention could also be used. It would be interesting to not only know if someone thinks an action is sexual harassment, but what they would do when the event occurs. Would they report it? Would they intervene? That would be an interesting follow up to this study. Reaction time could be measured in the future to make sure participants are taking the time to read the questions and not taking too long to answer them. Most importantly, data collection needs to continue in the future. Data collection is still in progress though, and we expect future results to keep to these trends.