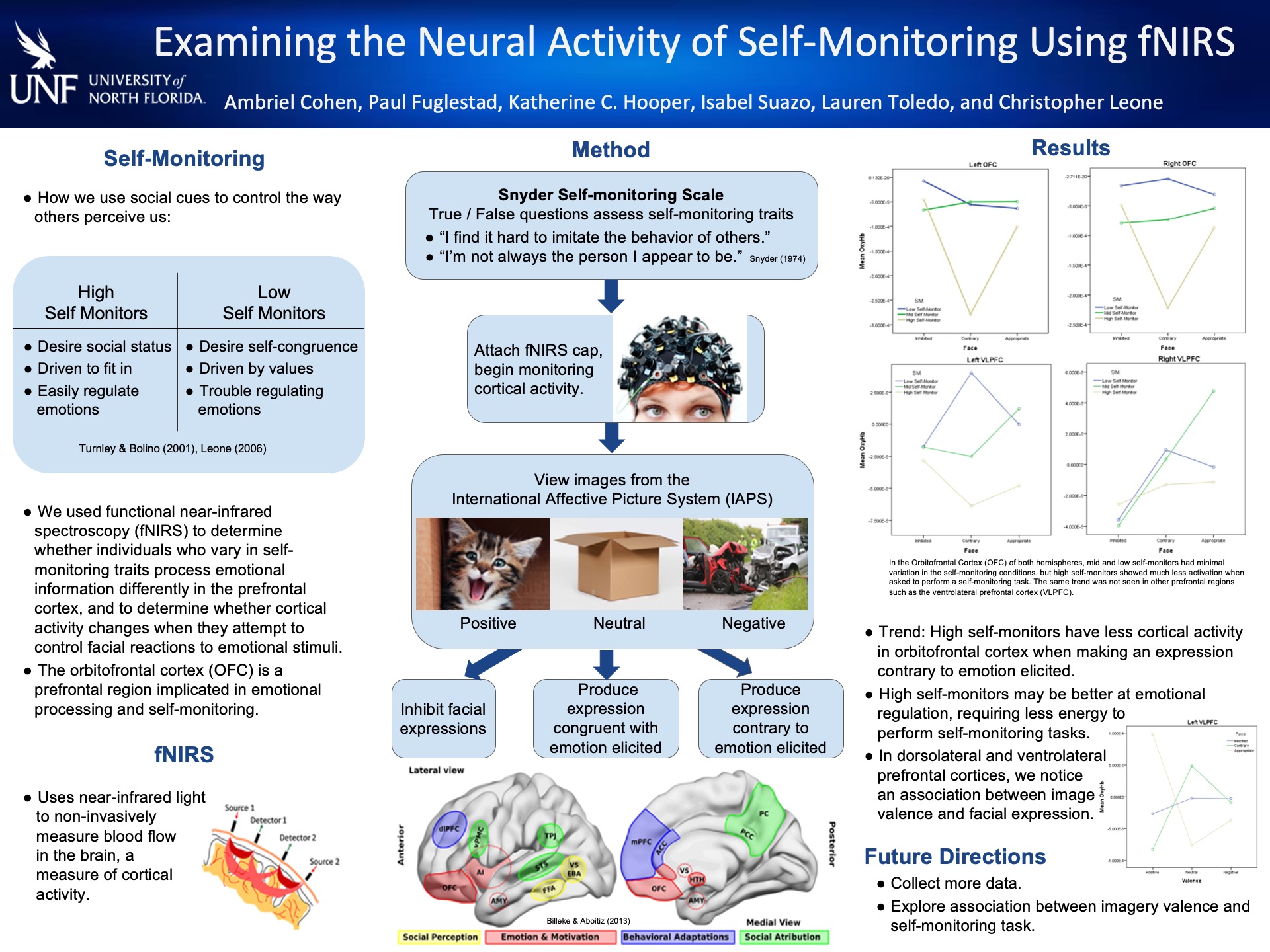 Hello my name is Ambriel Cohen and my study looks at the social psychology phenomenon of self-monitoring using fNIRS, which is a brain imaging technology. fNIRS stands for functional near infrared spectroscopy and it uses two wavelengths of near-infrared light to measure the concentration of oxygenated and deoxygenated hemoglobin in the brain, which gives us an approximation of brain activity.

Specifically in this study, we’re looking at self-monitoring, which is the extent to which one regulates their outward presentation of themselves to produce a certain image of themselves in others. One aspect of this is emotional regulation, in which high self-monitors tend to more easily regulate the presentation of their emotions, while low self monitors tend to do this a little bit less.   To study this, we had participants fill out the Snyder self-monitoring scale to determine whether they were high or low self monitors. Then participants were hooked up to an fNIRS machine and viewed a series of images that were positive, neutral, and negative, while doing one of three tasks: either inhibiting all facial expressions; producing an expression that is consistent – that is, the same as the emotion they feel; or making a facial expression that is inconsistent – that is something other than what they actually feel. This third condition  of making inconsistent facial expressions is one that especially activates self-monitoring.

When looking at the association between high, low and mid self-monitoring and  the task they were completing, our results showed that in the orbital frontal cortex – which is a region that has already been associated with self-monitoring, high self monitors producing inconsistent facial expressions had an interesting trend. There was actually lower brain activation than the mid and low koiself-monitors. This is seen only in the orbital frontal cortex – in some of the other areas like the ventrolateral prefrontal cortex, you don’t see the same trend. This may be due to the fact that high self monitors are more used to practicing their emotional regulation and therefore it doesn’t take as much effort, leading to lower activation.

We also found that there was a significant association between the emotional valence of the images viewed and the expressive tasks participants were completing in brain regions that were associated in emotional processing. This makes sense with the knowledge that these regions are important and emotional processing but it is interesting to see that there is also the connection with emotional expression in these regions. We hope to keep exploring this association, as we keep collecting and analyzing data.

Thank you and let me know if you have any questions!

PrevPreviousSelf-Monitoring and Relationship Commitment: Mediating Effects of Satisfaction, Investment, and Quality of Alternatives
NextWhat is the Impact of Positive Feedback on Student Academic Achievement?Next