Favorite Teacher or Worst Nightmare? Teachers Who Crossed The Line 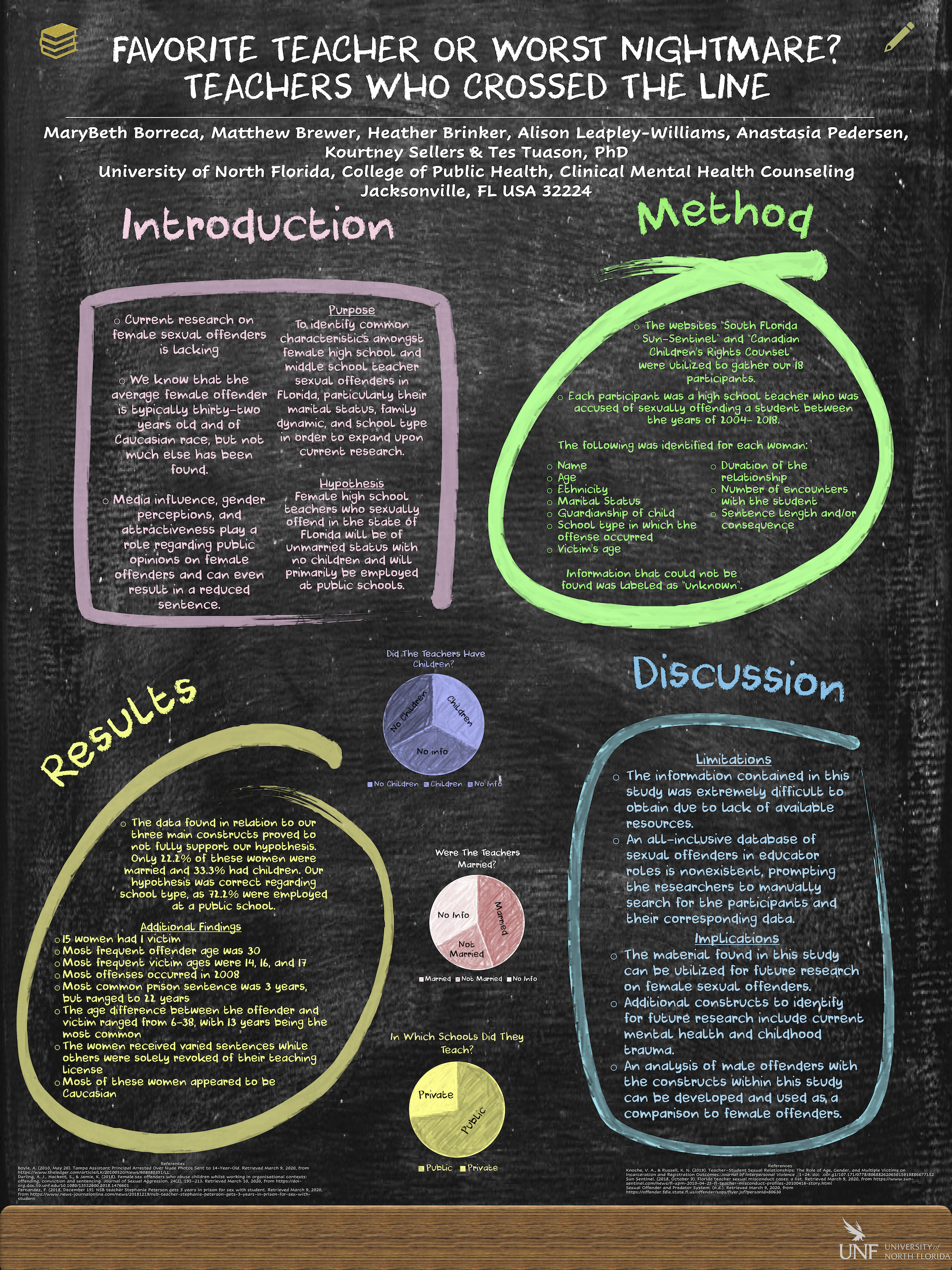 What kind of teacher sexually abuses her students? The current study, guided by critical theory, examines common characteristics of female high school teachers who sexually abuse their students. Extant research on teacher student relationships have found commonalities in the demographics of the offenders, their experience of adverse childhood experiences, common age of the victims, re-offense rates, and public perception of these types of crimes. The current study furthers previous research, by investigating their marital status at the time of the offense (married or not married), whether or not the offender has children, and school type (public or private). This study collected n=18 cases of female high school teachers in the state of Florida who are sexual offenders, and whose victims are their students. We have collected qualitative secondary data from news articles and investigative reports published by two websites: The Canadian Children’s Rights Council and The South Florida Sun Sentinel. Specific characteristics on each of the offenders were coded and inputted on Excel and data was analyzed using the phenomenological methodology. These characteristics include our three main constructs, in addition to offender as well as victim age. Results of the study will be discussed to help illuminate further common characteristics among these offenders, especially focusing on their relationship status, parental status, and school type in which they were employed at the time of the offense. Finally, implications on future research will be discussed.

Our study which was guided by critical theory, examines common characteristics of 18 female high school and middle school teachers, in Florida, who sexually abused their students. Our research investigates the teacher’s marital status at the time of the offense, whether r or not the offender has children, and if they were a teacher at a public or private school. We collected qualitative secondary data from new articles and investigative reports published by The Canadian Children’s Right Counsel and The South Florida Sun-Sentinel. If the two websites did not have the information we were looking for, we searched other websites for the missing information. Each offender had to meet the criteria of being a woman, in Florida and had the offense during the years of 2003 and 2018.

Once gathering the information, we looked for the victims age, offenders age, if she was married, if she had children, whether she taught at a private or public school, the duration of the inappropriate relationship or how many encounters, her sentence length or consequence and the date of the offense making sure it   fell within the parameters.

SO IF WE LOOK AT THE POSTER:

The Purpose of this study was :
To identify common characteristics amongst female high school and middle school teacher sexual offenders in Florida, particularly their marital status, family dynamic, and school type in order to expand upon current research.

The Current research on female sexual offenders is lacking.
What we do know is that the average female offender is typically thirty-two years old and of Caucasian race, but not much else has been found.

Media influence, gender perceptions, and attractiveness does play a role regarding public opinions on female offenders and can even result in a reduced sentence

Female high school teachers who sexually offend in the state of Florida will be of unmarried with no children and will primarily be employed at public schools.

The METHOD we used was

To look through a list of teachers that were sexual offenders.

The websites “South Florida Sun-Sentinel” and “Canadian Children’s Rights Counsel”  were utilized to gather our 18 participants.

Each offender was a high school teacher who was accused of sexually offending a student between the years of 2004- 2018.

The following was identified for each woman:

Name, Duration of the relationship, Age, Ethnicity, Marital Status, Guardianship of child, School type in which the offense occurred, Victim’s age, Number of the encounters with the student And Sentence Length and /or consequence

Looking at the RESULTS

The data found in relation to our three main constructs proved to not fully support our hypothesis. Only 22.2% of these women were married and 33.3% had children. Our hypothesis was correct regarding school type, as 72.2% were employed at a public school.

In addition to find what we found about our hypothesis was:

Most offenses occurred in 2008
Most common prison sentence was 3 years, but ranged to 22 years
The age difference between the offender and victim ranged from 6-38, with 13 years being the most common
The women received varied sentences while others were solely revoked of their teaching license

This limitations we faced were:

Some of the information contained in this study was extremely difficult to obtain due to lack of available resources.

An all-inclusive database of sexual offenders in educator roles is nonexistent, prompting the researchers to manually search for the participants and their corresponding data.

Thank for taking the time to view our research poster,

PrevPreviousOn Fire or Burned Out?: The Role of Self-Monitoring on Burnout in the Workplace
NextSelf-Monitoring and Relationship Commitment: Mediating Effects of Satisfaction, Investment, and Quality of AlternativesNext

4 thoughts on “Favorite Teacher or Worst Nightmare? Teachers Who Crossed The Line”