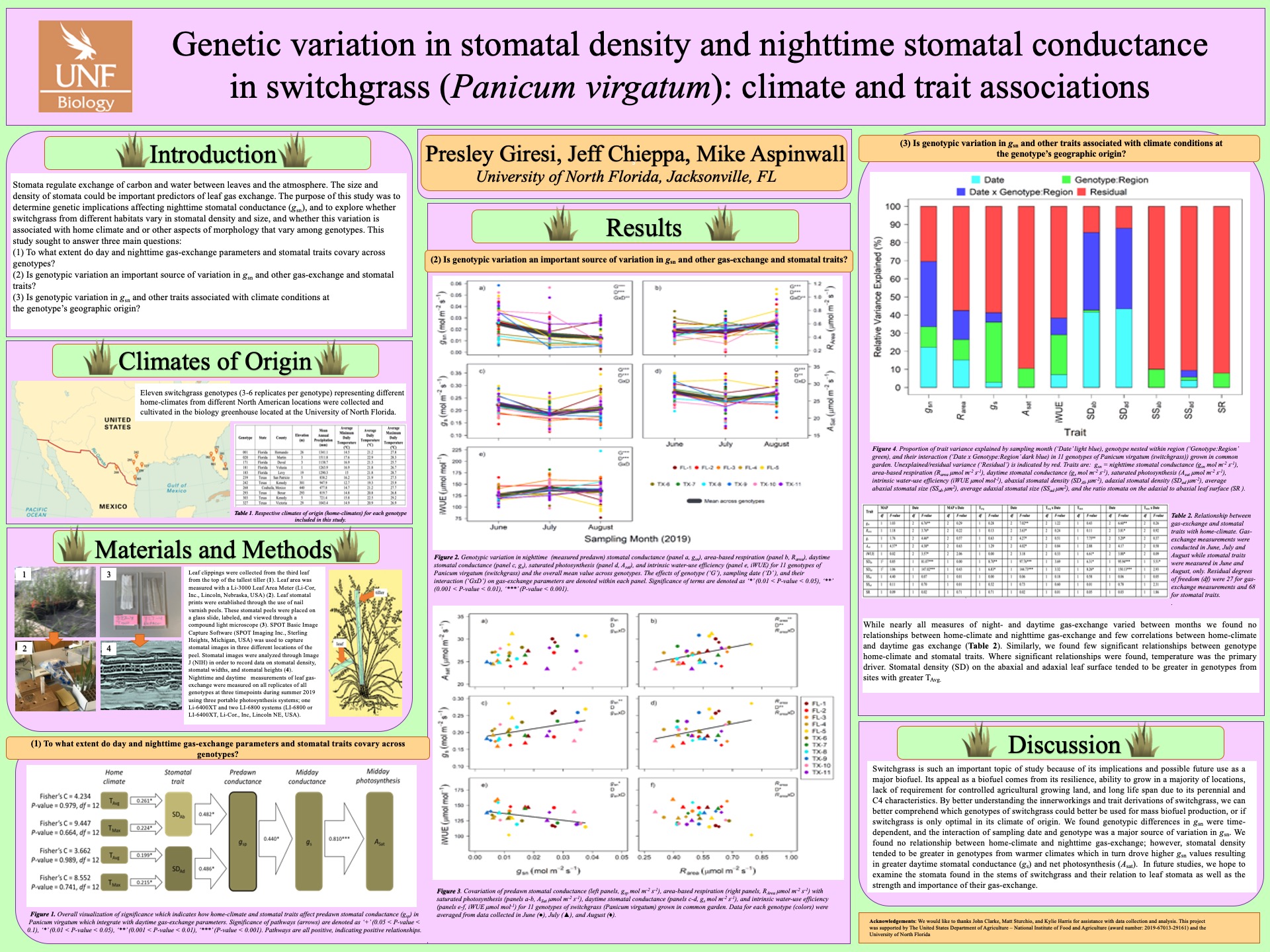 Switchgrass (Panicum virgatum) is a perennial C4 plant with a wide geographic distribution. Although switchgrass is widely distributed, deviations in morphological and physiological traits can occur as an adaptation response to the unique climate and habitat in which it is found. Variation in abaxial (lower) and adaxial (upper) stomatal density and size could result in different rates of leaf water loss and evaporative cooling. The purpose of this study was to determine genetic implications affecting nighttime stomatal conductance (gsn). We measured rates of nighttime and daytime gas-exchange, as well as stomatal size and density during early-, mid-, and late-summer. We addressed three questions: 1) is genotypic variation an important source of variation in gsn and other gas-exchange and stomatal traits? 2) is genotypic variation in gsn associated with climate conditions at the genotype’s geographic origin? 3) to what extent do day and nighttime gas-exchange parameters and stomatal traits covary across genotypes? We also explored the relationship between stomatal and morphological traits and how these correlations relate to home climate. We found genotypic differences in gsn were time-dependent, and the interaction of sampling date and genotype was a major source of variation in gsn. We found no relationship between home-climate and nighttime gas-exchange; however, stomatal density tended to be greater in genotypes from warmer climates which in turn drove higher gsn values resulting in greater daytime stomatal conductance (gs) and net photosynthesis (Asat). By understanding the innerworkings of stomatal function as well as how switchgrass grows, adapts, and the strengths/weaknesses in certain genotypes, there may be future application of switchgrass as a mass biofuel.

Hello, my name is Presley Giresi and I am a sophomore biology student at the University of North Florida. I began working in the Aspinwall Plant physiological ecology lab in August of 2019, where I was given the opportunity to work on the project I will present to you today. Over about the last year, we have been working to collect both morphological and physiological data on switchgrass samples in order to examine its nighttime stomatal conductance and day-time gas-exchange rates, as well as a variety of other characteristic plant traits. Switchgrass is a common C4 plant that was an optimal choice for this experiment due to its wide distribution across North America as well as its versatility, resilience, and resourcefulness. Our main focus in this experiment was to collect data to interpret the contributing sources that drive nighttime stomatal conductance. It would seem obvious for a plant to not lose water during the night, but a hypothesis that we support pertaining to this trend is that nighttime stomatal conductance is an adaptive trait given that genotypes within species may show considerable difference in their nighttime conductance rates. As stomata are the primary site of gas exchange, stomata density, size, guard cell properties, and regulation of ion channels may have an influence on daytime stomatal conductance rates. In order to conduct this experiment we used 11 different genotypes of switchgrass from Florida, Texas, and Mexico, and propagated and grew them in the UNF greenhouse. Nighttime and daytime measurements of leaf-gas exchange were carried out on all replicates of all genotypes at three times during the summer of 2019 using portable photosynthesis systems. The goal of this experiment was to answer three driving questions, the first one being: To what extent do day and nighttime gas-exchange parameters and stomatal traits covary across genotypes? If you direct your attention to figure 1, you will notice that there several very significant positive relationships between the displayed stomatal traits, home climate traits, and stomatal conductance rates. We found no direct relationship between home climate and nighttime stomatal conductance, but we did observe positive relationships between average daytime gas exchange rates and precipitation or temperature. The significance of these relationships are displayed. What I find most interesting about this data, is that stomata on the abaxial and adaxial sides of a switchgrass leaf tend to have the same effect on predawn or nighttime stomatal conductance, and we found genotypes from more warmer climates to have a higher stomatal density which in turn resulted in greater observed rates of nighttime conductance. This may be due to the fact that a more stomatally-dense leaf tends to have smaller stomata, which can allow a plant to achieve higher rates of stomatal conductance.

The second driving question of our experiment was: Is genotypic variation an important source of variation in nighttime stomatal conductance and other gas-exchange and stomatal traits? As described by figure 2, average rates of nighttime gas exchange differed among genotypes, but these differences were dependent upon sampling date. Some genotypes showed nighttime gas exchange rates that were consistently low or high over time, while others fluctuated heavily over time. Average daytime gas-exchange rates differed among genotypes, and these differences were relatively consistent over time, meaning there was no trend between date and genotype interaction. Interestingly, stomatal density on both the adaxial and abaxial sides both declined by over 80% between our June and August measurements. Genotypes differed in abaxial and adaxial stomatal density, and these differences were consistent over time. If you direct your attention to figure 3, you will see that we found that genotypes which exhibited a higher rate of nighttime stomatal conductance had higher rates of overall stomatal conductance and lower rates of intrinsic water use efficiency. Across genotypes, we also found positive relationships between leaf dark respiration and saturated photosynthesis and between leaf dark respiration and overall stomatal conductance.

Our third and final driving question of this research experiment was: Is genotypic variation in gsn and other traits associated with climate conditions at the genotype’s geographic origin? If you take a look at figure 4, you will see the relative variance that contributes to the different traits listed. As you can see from the first column, nighttime stomatal conductance is heavily influenced by the interaction between date and genotype region, the variance being 36%. In comparison, genotype alone and date alone explained 11.4% and 22.2% of the variation in nighttime stomatal conductance. Both abaxial and adaxial stomatal density displayed high rates of variance due to date, hinting at the fact that drastic changes in stomatal density are mostly due to a form of seasonal adaptation.