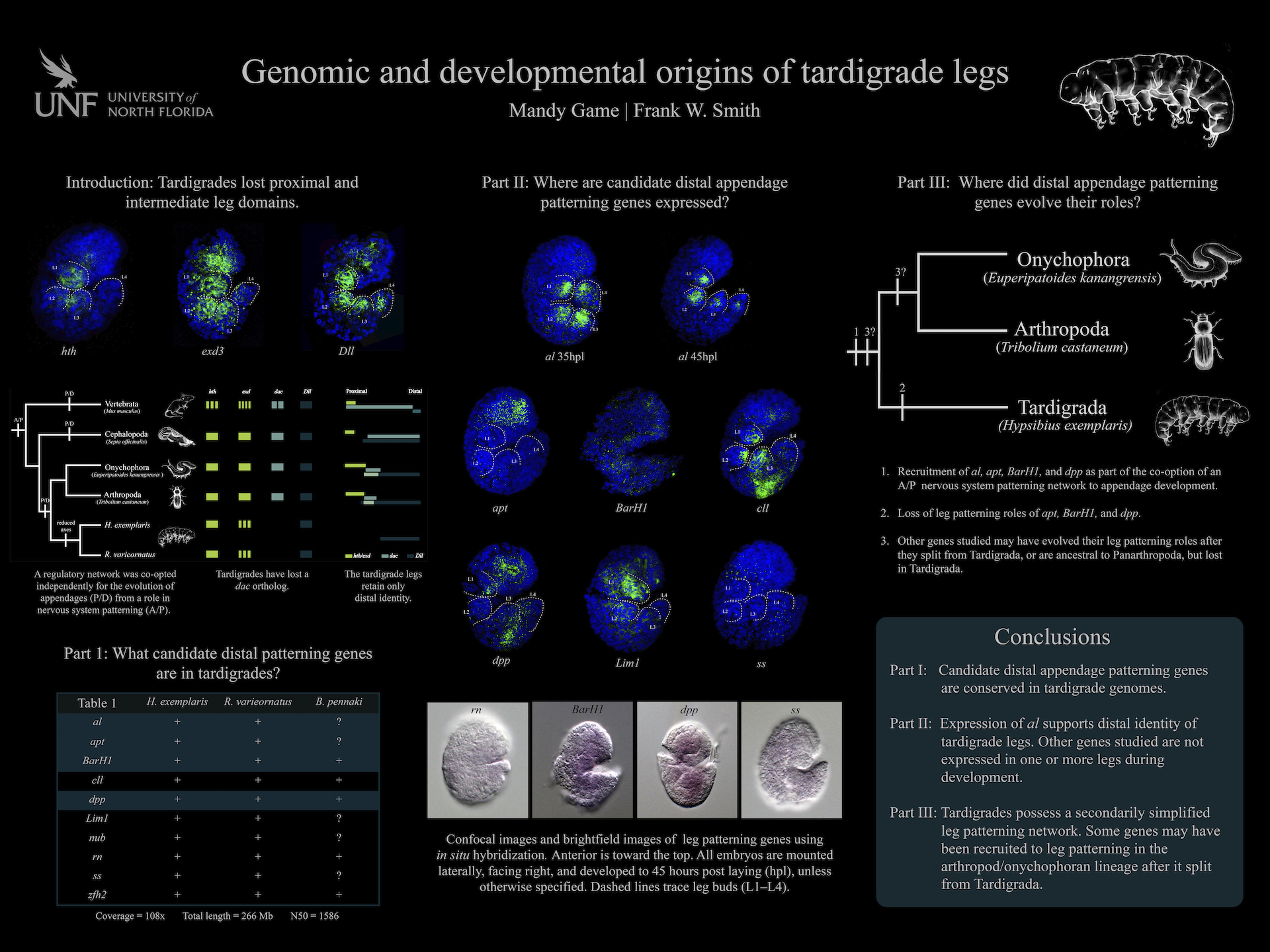 Tardigrada consists of two lineages—Heterotardigrada and Eutardigrada. All tardigrades are microscopic animals with tiny legs. To understand the evolution of tardigrade legs, we have analyzed the leg gap genes, Distal-less, dachshund, and homothorax/extradenticle, which specify distal, intermediate, and proximal appendage domains in arthropods. In Hypsibius exemplaris, a representative of Eutardigrada, Distal-less is broadly expressed across the appendage bud during development. Homothorax/extradenticle do not specify proximodistal appendage domains in this species. Dachshund is not found in the genomes of H. exemplaris or a second representative of Eutardigrada, Ramazzottius varieornatus. These results indicate that tardigrade legs evolved by the loss of proximal and intermediate regions. To further characterize the evolution of the proximodistal axis of tardigrades, we recently sequenced the genome of Batillipes pennaki, a representative of Heterotardigrada. Consistent with our earlier study of eutardigrade genomes, orthologs of Distal-less, homothorax, and extradenticle are present in the genome of B. pennaki, and an ortholog of dachshund is not present in the genome. In order to further characterize the role of Distal-less in tardigrade leg development, we have identified orthologs of genes that are either upstream or downstream of Distal-less during leg development in arthropods. We have identified orthologs of BarH1, clawless, decapentaplegic, rotund, and zfh2 in both eutardigrade and heterotardigrade genomes. Additionally, we have identified orthologs of apterous, aristaless, Lim1, nubbin, and spineless in eutardigrade genomes. Results of preliminary analyses of the developmental roles of candidate appendage patterning genes in H. exemplaris will be shown.

Hello, my name is Mandy Game and I’m here to talk to you about Genomic and Developmental Origins of Tardigrade Legs.

For introduction and background, our lab focuses on animal body plans, why they look the way they do and how they evolved. Our lab uses the tardigrade as a model system because of its position in the animal tree of life. Tardigrades are part of a group of animals called Panarthropoda, which also includes arthropods (a lineage of animals that includes spiders and insects) and onychophorans (the velvet worms). Tardigrades are well positioned within this group to help us answer questions about what the last common ancestor of Panarthropoda looked like.

Tardigrades are incredibly small, microscopic animals, with a compact body plan.  We believe they evolved their small body size over evolutionary time, meaning they started out bigger and got smaller and smaller. Frank Smith, the PI of our lab, discovered a few years ago that tardigrades are actually missing a big part of their anteroposterior body axis (the axis of the body that runs from the head to the tail of the animal). The section missing in tardigrades corresponds to the trunk region of other panarthropods. Frank made this discovery when he realized that tardigrades are missing a number of Hox genes – a group of genes that set up the trunk region of almost all other animals. Because the Hox genes are retained in almost all other animals, including other panarthropods, we believe they were lost in tardigrades over evolutionary time. Meaning, tardigrades have a secondarily simplified anteroposterior body axis.

In this study, we conclude that proximal and intermediate leg domains were lost in tardigrades, rather than this being the ancestral state. Meaning, the last common ancestor of Panarthropoda had legs that had defined proximal, intermediate, and distal domains, and that the proximal and intermediate domains were lost in the tardigrade lineage. We can say this because this regionalized expressed pattern existed before appendages evolved in animals. This pattern originated as a nervous system patterning network that can be found in many distantly related animals, and that the network has been co-opted for appendages independently several times across animal phylogeny!

Part 1: What candidate distal patterning genes are in tardigrades

So now that we’ve determined that tardigrade legs retain only distal identity, we continue trying to understand what patterns the legs of tardigrades by looking at other genes that are found in the distal limbs of arthropods and onychophorans. We looked through genome assemblies of three different tardigrade species and pulled out orthologs of 10 distal limb patterning genes in Hypsibius and Ramazzottius – two relatively closely related tardigrade species. We were only able to uncover some of these genes in an unpublished Batillipes genome assembly. This assembly was sequenced by our lab, and it will be very important for our research, as this species of tardigrade is the most distantly related tardigrade species to the other two—they are about 500 million years diverged from Hypsibius and Ramazzottius! We are still working on cleaning this assembly up so that we can use it to make more important discoveries soon!

We use confocal microscopy and a method called in situ hybridization to help us visualize where these genes are expressed in developing tardigrade embryos. We can use the information we get from the sequenced genes to make gene specific probes that, after a long experiment, will cause the embryo to fluoresce wherever the gene is expressed when we shoot it with confocal microscope lasers. In the images you can see in Part II, the blue spots are a DAPI stain that cause the nuclei of individual cells of the tardigrade embryo to fluoresce. The green is where the gene expression is. This is where our probes are sticking to mRNA transcripts. As you can see, the gene expression for the distal appendage patterning genes are a little all over the place! Aristal-less (al) is the only gene we can see expressed somewhat uniformly in every developing leg. For clawless (cll)  we see it expressed in every leg except for the fourth! The rest are not exactly expressed in ways we would expect! These are very preliminary results and there is still a lot of work to do to uncover the mystery of what these genes are doing in tardigrades. Part III: Where did distal appendage patterning genes evolve their roles?

Our main conclusion concerning tardigrade legs at the moment is that is appears that they have a secondarily simplified leg patterning network, even within their already secondarily reduced proximodistal axis. More evidence that tardigrades evolved their microscopic size by losing genes, reducing axes, and cutting down on roles that genes will play in different regions of their bodies. Tardigrades are the ultimate minimalists!

5 thoughts on “Genomic and Developmental Origins of Tardigrade Legs”