Investigation of anxiety and trauma in african american girls 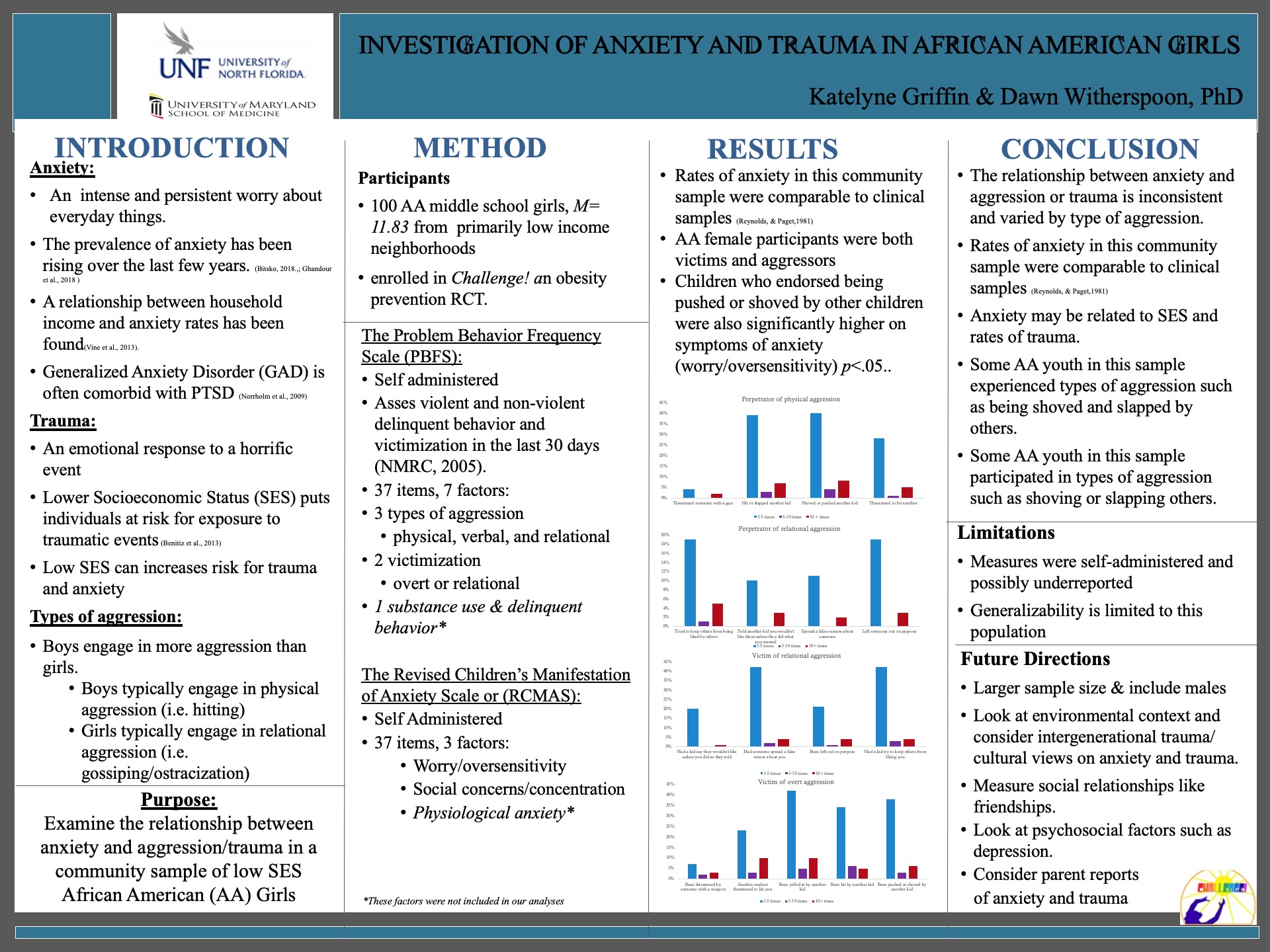 Background: In lower income areas it has been found that there is a relationship between annual household income and types of anxiety found in adolescence. African Americans (AA) have a higher lifetime prevalence of PTSD from trauma compared to White Americans (Benitez et al., 2015). Studies found that anxiety disorders are more common and impairing conditions for AA (Himle et al., 2009); however, factors pertaining to the anxiety levels of AA girls are understudied. AIM Examine the relationship between anxiety and everyday aggressions and trauma in low income AA female youth.

Results: Participants were both victims and aggressors. In terms of Physical Aggression, 52% of the AA girls reported shoving or pushing a peer within the last 30 days, 6% endorsed threatening a peer with a weapon. For Victimization, 12% reported being threatened with a weapon (knife, gun etc.) in the last 30 days. While 47% of the sample reported being shoved or pushed by another child between at least once in the last month. Children who endorsed being pushed or shoved by other children were also significantly higher on symptoms of worry/oversensitivity (p<.05) but not overall depression (ns).

Conclusions: AA youth in this sample experienced and engaged in high rates of aggression.

for my poster I investigated the rates of trauma and anxiety in African American girls.

To start off, I’ll give you an overview to what anxiety and trauma are. Anxiety is typically categorized as feelings of excessive worry and unease. While anxiety within itself is not particularly novel, as it is expected, nearly everyone will experience it at some point, there has been a substantial increase in the rate of diagnoses in child populations. There’s also been research supporting the relationship between anxiety rates and household income.

Trauma on the other hand is an emotional response to a horrific event. Horrific events can include seeing or experiencing violence from a weapon and even being bullied. Populations that reside within low Socioeconomic status neighborhoods experience disproportionate amounts of exposure to potentially traumatizing events compared to others. Overall, Low SES can increase anxiety and trauma rates.

The purpose of the poster before you were to examine the relationship between anxiety and aggression/trauma in a community sample of low SES African American (AA) Girls.

The participants were initially recruited for Challenge! An obesity and overweight intervention, that sought to teach them healthy eating habits and implement an active lifestyle. They are between the ages of 11-15 and reside within primarily low income neighborhoods.

The questionnaires that were given to the girls that were of particular interest to us were the Problem Behavior Frequency Scale (PBFS) and the Revised Children’s Manifest Anxiety Scale (RCMAS). The PBFS examines problem behaviors within the last 30 days. There are 7 factors that measure types of aggression, types of victimization, and substance use/delinquent behavior. However, substance use and delinquent behavior were not utilized in our analyses. The RCMAS looks at the level and nature of anxiety. This scale examines three factors pertaining to different types of anxiety; Worry/oversensitivity, Social concerns/concentration, and Physiological anxiety. However, it should be noted we did not utilize physiological anxiety in our analyses.

We found that African American female participants were both victims and aggressors. Children who endorsed being pushed or shoved by other children also reported significantly higher symptoms of worry/oversensitivity (p<.05) Rates of anxiety in this sample were comparable to clinical samples who also used the RCMAS.

If you take a look at some of the graphs below, you’ll see that perpetrators of aggression were more frequent in the 1-5 times or the 10+ times in comparison to the middle ground. Concerning as well is the number of children who endorsed threatening someone with a weapon. Nearly half the sample endorsed being a victim at one point.

So, what do these findings tell us, you may ask?

There are obvious limitations within this study, notably the fact that the questionnaires are self-administered and as a result subject to biases. Also, the generalizability of these results is limited to this population.

Some future directions should consider environmental context and intergenerational trauma/cultural views on anxiety and trauma. As we move into the future of research it is important to note that intergenerational trauma has been found to have support for people’s susceptibility to trauma and anxiety. As well as, the views of culture can influence people seeking help for trauma and/or anxiety and for what they consider to be anxiety inducing or traumatic. Taking a more holistic approach towards the development and treatment of trauma and anxiety,  will help future researchers garner more accurate pictures of the way these things  affect  different groups of people.