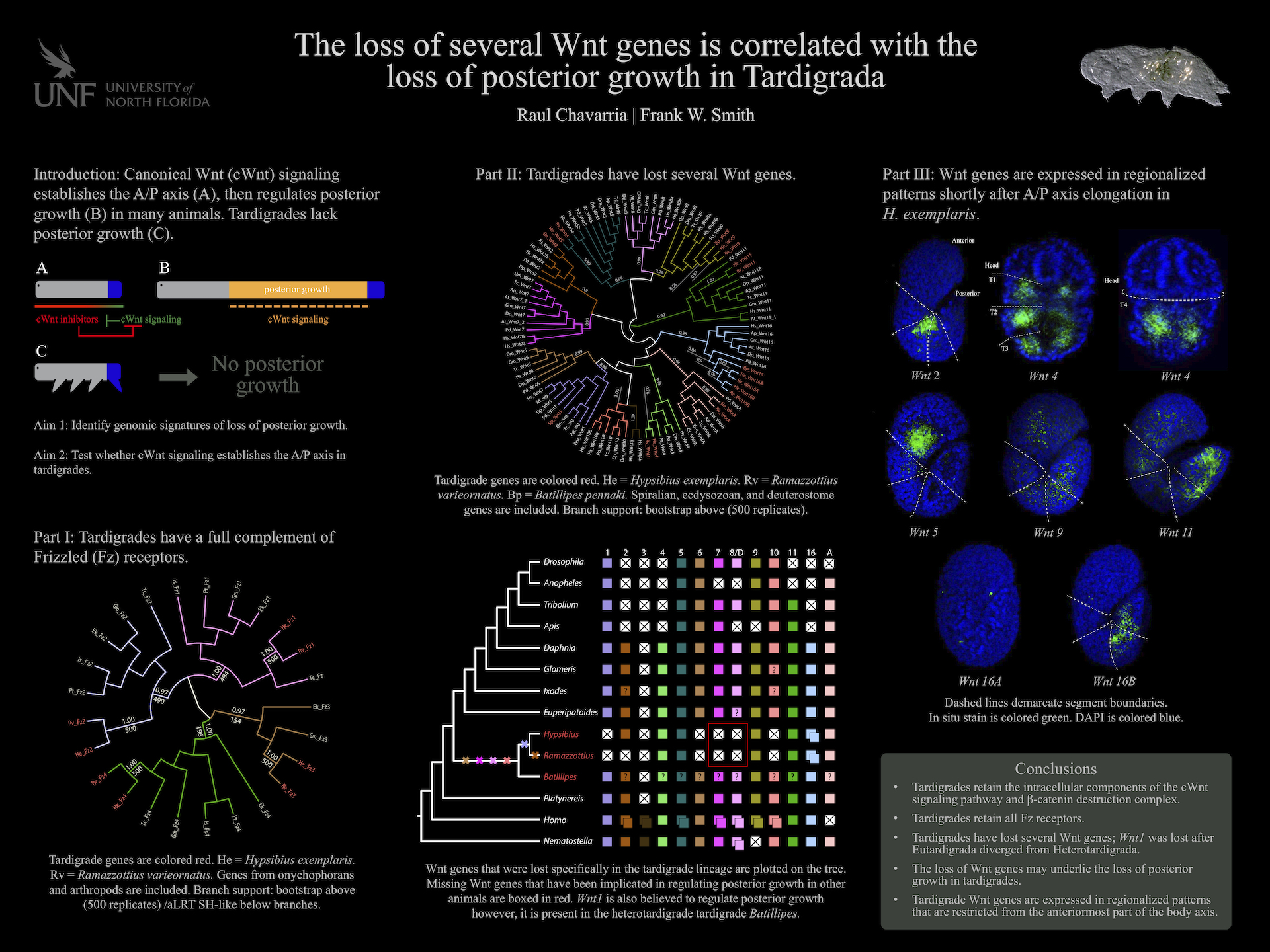 Hello, my name is Raul Chavarria and today we are going to be talking about tardigrades. More specifically, how the loss of several Wnt genes is correlated to the loss of posterior growth in these animals.

Tardigrades are tiny microscopic animals with a compact body plan that live all over the world.  Tardigrades are nested within panarthropoda alongside other relatives like velvet worms and arthropods, which includes insects and spiders. Panartrhopoda is an important group due to the vast array of diversity and evolutionary innovation that’s found within them. Tardigrades hold a unique position within this group and that can help us answer questions about what the last common ancestor of panarthropoda looked like. Ultimately, we seek out to understand why tardigrades look so weird and how they evolved.

Tardigrades have evolved their small body size over evolutionary time through changes in the way their body plan is developed. Frank Smith recently discovered that tardigrades have a truncated body plan that evolved through the loss of several hox genes. These hox genes are genes that are conserved across all bilaterian animals and they typically set up the anterior-posterior (A/P) axis in developing embryos. The A/P axis is the axis of the body that runs from the head to the tail of the animal, so the loss of some of these hox genes suggest that tardigrades have a secondarily simplified A/P axis. To be more specific, the hox genes that were lost in tardigrades typically demark the trunk region of other animals, so in the simplest terms the tardigrade body plan is homologous to a head and a butt with a missing trunk.

Part I Tardigrades have a full complement of Frizzled (Fz) receptors

We looked at the genome of two tardigrade species, Hypsibius exemplaris and Ramazzotious varieornatus and found that tardigrades have all the intracellular components of the canonical Wnt signaling pathway. This suggest that the pathway is still active in tardigrades. Not surprisingly, we were also able to identify a full complement of Frizzled receptors in both species, part of the extracellular component of the pathway. We included a gene tree here to illustrate this. All tardigrade genes are colored in red and we included onychophoran and arthropod genes to help build this relationship. Without these genes present the canonical Wnt pathway would likely not be functional.

Next, we decided to look at the ligand component of the pathway. We found that tardigrades have lost several of the wnt genes. This was done through a phylogenetic analysis utilizing genes from other animals like arthropods, onychophorans, annelids, jelly fish and even humans to build the matrix so we can really be sure that these are the correct Wnt genes. You can see the relationship built by looking at the tree illustrated right below part II, all tardigrade genes are colored in red here. We were surprised by the large loss of ligands found in tardigrades and originally, we had looked at two species, Hypsibius exemplaris and Ramazzotious varieornatus but our lab has recently started sequencing the genome of another tardigrade Batillipes pennaki. Batillipes is a distant relative of these two tardigrades that diverged almost 500 million years ago so it provides us with another clue into how the tardigrade body plan evolved through time. With the evidence presented so far, we built another phylogenetic tree to illustrate the loss of Wnt genes in relation to other animals. The loss of Wnt ligands are plotted on the tree by color coded X marks. As you can see, Hypsibius and Ramazzotious are missing Wnt1, Wnt3, Wnt6, Wnt7, Wnt8, and Wnt10. Interestingly, Wnt7 and Wnt8 have been implicated in regulating posterior growth in many other animals so these genes are boxed in red here. To add to the story, Wnt1 has also been implicated in regulating posterior growth in other animals and is also missing in both Hypsibius and Ramazzotious. However, we were able to identify a Wnt1 ortholog in our pre-liminary analysis of the Batillipes genome suggesting that the loss of this gene is not ancestral to the tardigrade lineage. Since we are still in the process of analyzing this genome, we also added question marks (?) to boxes where a gene has not yet been looked for. However, these findings give us evidence for genomic signatures of loss of posterior growth

Here we are looking at tardigrade embryos right after the A/P axis has been established. Most of the embryos are lateral facing except for the Wnt4 images. The green staining shows gene expression for that specific Wnt ligand while the blue shows the cell nuclei. We have been able to look at gene expression for all the Wnt genes found in tardigrades except for WntA. Each Wnt gene has a unique expression pattern but overall, they are all expressed in a regionalized pattern restricted from the anterior-most part of the body axis. This matches the model proposed in our introduction. Which is exciting, however we are still interested in doing more gene expression experiments for these Wnt ligands at different developmental stages to help better construct their function in establishing the A/P axis. Ultimately, we are also looking forward to doing functional studies by knocking down one or several of these ligands in order to see their effect on A/P axis formation. This is to be done by utilizing dsRNA and observing the resultant phenotype.

In summary we tried to identify genomic signatures of loss of posterior growth and to test whether cWnt signaling establishes the A/P axis in tardigrades. We found out that 1) Tardigrades retain the intracellular components of the cWnt pathway. 2) Tardigrades retain all Frizzled receptors. 3) Tardigrades have lost several Wnt genes. However, Wnt1 was lost after Eutardigrades split from Heterotardigrades. 4) The loss of Wnt genes may underlie the loss of posterior growth, shown by the loss of Wnt7 and Wnt8. And finally we found that tardigrade Wnt genes are expressed in regionalized patterns that are restricted from the anterior-most part of the body axis.

Thank you, I’d be happy to answer any questions.