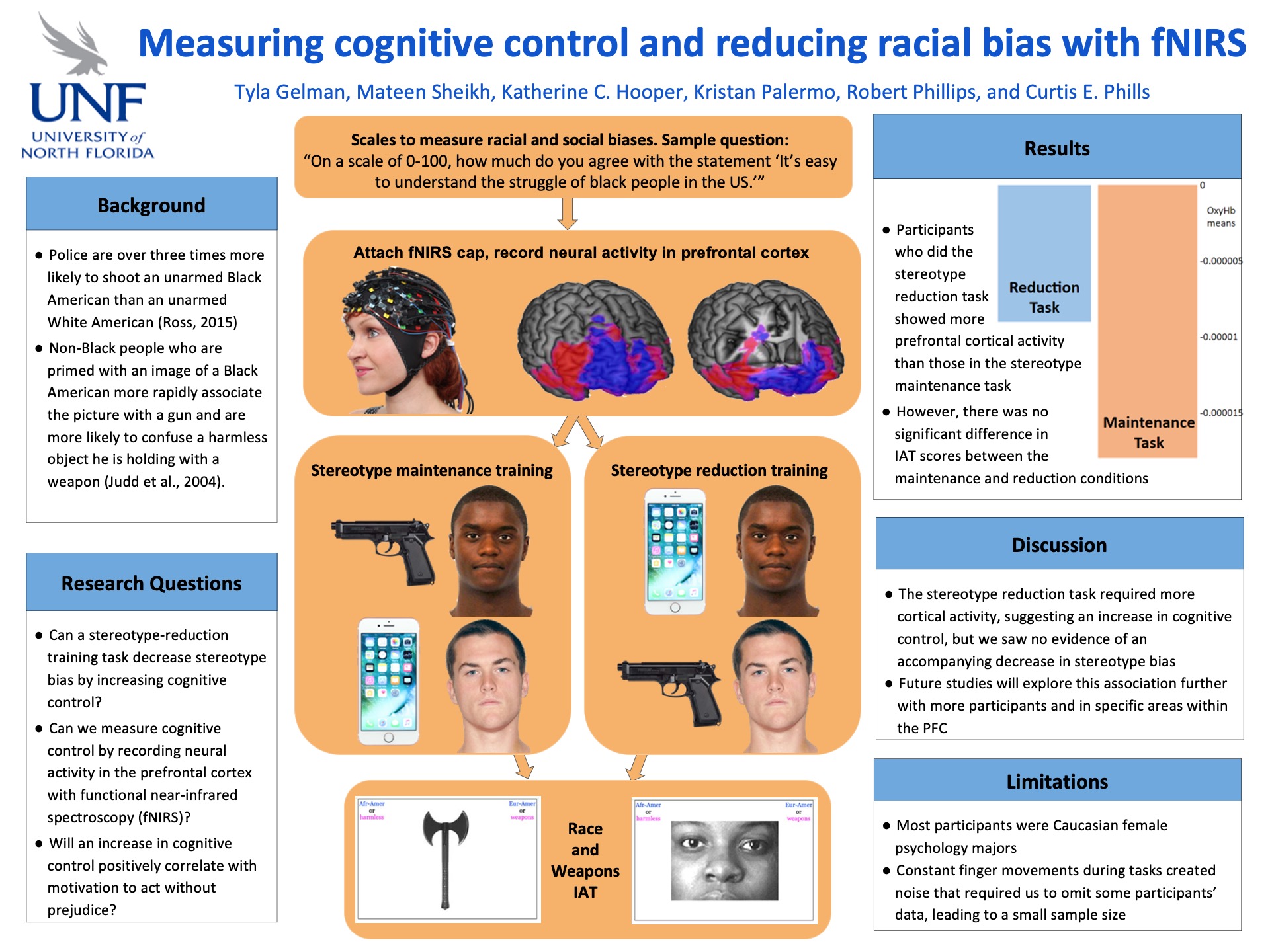 To investigate factors that could reduce the disproportionate killings of Black Americans by police officials, this research examines if cognitive control moderates the impact of stereotype-reduction training on stereotype activation. Participants in the counter-stereotypic training condition selects cell phones when presented with images of Black individuals and selects guns when presented with images of White individuals, whereas participants in the stereotype-maintenance condition made the opposite selections. The cognitive control is inferred from functional near-infrared spectroscopy (FNIRS) BOLD (blood oxygen level-dependent) responses in the prefrontal cortex during the training and implicit stereotyping tasks. We predicted that stereotype-reduction training would be most effective among participants that exert cognitive control during the training and implicit stereotyping tasks. The present study aims to provide insight into neural activity involved in stereotype-reduction training and further the understanding of individual differences that may moderate effects of bias training.

Several research studies have found racial bias to be present against Black Americans. Police are more than 3 times more likely to shoot an unarmed Black American versus an unarmed white American. In addition, Outgroups are also quicker to associate Black Americans with a gun and confuse harmless objects with harmful ones. This study aims to investigate factors that could reduce the disproportionate killings of Black Americans by police officials by answering several research questions, namely, whether a stereotype-reduction task can decrease stereotype bias by increasing cognitive control?

To test this research question, the researchers asked participants to first complete a questionnaire which assessed their views on social issues including race and stereotypes. Afterwards, participants were hooked up to a functional, near infrared spectrometer to read neural activity in their prefrontal cortex during the remainder of the study. Participants went through either 1 of 2 training tasks, maintenance or reduction. In the maintenance group, participants were trained to associate a picture of a Black American with a gun and white American with a cellphone. In the reduction group, participants were trained in the opposite manner, associating Black Americans with a cellphone and White Americans with a gun. After the training task was complete, participants completed a Race and Weapons implicit association task to test, among many things, whether the stereotype reduction task was effective in reducing stereotype bias.

The results of this experiment indicated that participants in the stereotype reduction task showed more prefrontal cortical activity than their peers in the maintenance task, however, there was no significant difference found among the implicit association test scores. In short, while participants in the reduction task showed increased cortical activity which would suggest increased cognitive control, there was no evidence of a decrease in stereotype bias.

Limitations of this study were a result of the sample, which consisted mostly of Caucasian Female psychology majors. In addition, repeated finger movements from certain participants created noise, which rendered their data unusable and lead to a smaller sample size. In the future, the researchers plan to further explore stereotype bias with more participants and investigate specific areas of the prefrontal cortex.

PrevPreviousGenetic variation in stomatal density and nighttime stomatal conductance in switchgrass (Panicum virgatum): climate and trait associations
NextBlue is Green and Red is too: The Political Divide on Environmental Policy SupportNext