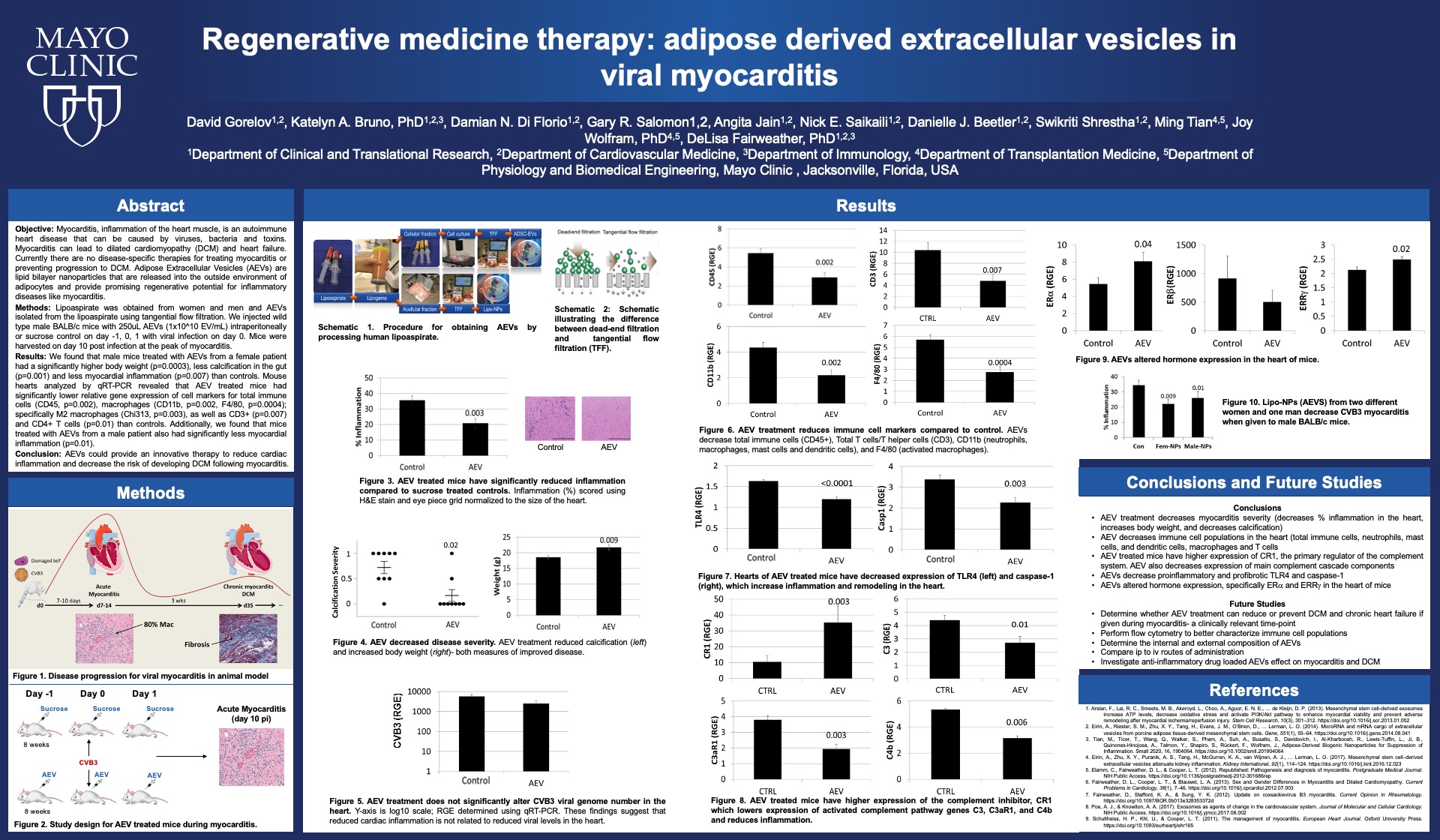 Objective: Myocarditis, inflammation of the heart muscle, is an autoimmune heart disease that can be caused by viruses, bacteria and toxins. Myocarditis can lead to dilated cardiomyopathy (DCM) and heart failure. Currently there are no disease-specific therapies for treating myocarditis or preventing progression to DCM. Adipose Extracellular Vesicles (AEVs) are lipid bilayer nanoparticles that are released into the outside environment of adipocytes and provide promising regenerative potential for inflammatory diseases like myocarditis.

Methods: Lipoaspirate was obtained from women and men and AEVs isolated from the lipoaspirate using tangential flow filtration. We injected wild type male BALB/c mice with 250uL AEVs (1×10^10 EV/mL) intraperitoneally or sucrose control on day -1, 0, 1 with viral infection on day 0. Mice were harvested on day 10 post infection at the peak of myocarditis.

Conclusion: AEVs could provide an innovative therapy to reduce cardiac inflammation and decrease the risk of developing DCM following myocarditis.

Hello everyone, my name is David Gorelov. My research project that I worked on during the BRINC internship in Dr. Fairweather’s lab, was on a new regenerative medicine therapy using adipose derived extracellular vesicles or (AEVs) for short, in viral myocarditis. Myocarditis is an autoimmune heart disease that causes inflammation of the heart muscle. Myocarditis can be caused by viruses, bacteria, and toxins, our lab focuses on coxsackievirus B3 myocarditis. AEVs are lipid bilayer nanoparticles that are released into the outside environment of adipocytes (fat cells) and provide very promising regenerative potential for inflammatory diseases like myocarditis. Adipose tissue is easily accessible, abundant and a heterogeneous source of biogenic nanoparticles. Our method of producing extracellular vesicles from adipose tissue is an innovative approach that takes less time, reduces production costs, and results in higher yields, compared to cell culture derived nanoparticles.

Figure 1, shows our translational animal model of myocarditis. It shows infection with coxsackievirus B3 on day 0, peak inflammation at day 10, which is when we harvested the mice for my experiments, and then disease progression to DCM at day 35. In the images we can see a grouping of inflammation, the abundance of violet-stained cells, on the histology slide which are mostly macrophages. The next histology slide displays the pronounced fibrosis that is characteristic of chronic myocarditis with DCM. Figure 2 illustrates our study design: We injected wild type male BALB/c mice with 250 microliters of AEVs intraperitoneally or with sucrose control on day -1, 0, 1 with viral infection (CVB3) on day 0. Schematics 1 and 2 show the procedure of how we obtained AEVs by processing human lipoaspirate. This method utilizes membranes with specific pore dimensions, leading to size-based separation and purification of liquid components. The fluid flows parallel to the membranes, causing less pore clogging and more efficient separation compared to dead-end filtration. In Figure 3, we can see that AEV treated mice had significantly reduced inflammation compared to sucrose controls. Hematoxylin and eosin staining was used to compare the percent of inflammation on the histology slides, which calculates the severity of the myocarditis. AEVs also decreased disease severity by reducing calcification and increasing body weight as seen in Figure 4. Figure 5 demonstrates that reduced cardiac inflammation is not related to the reduced viral levels in the heart. In Figure 6, we can see that AEV treatment reduced immune cell markers compared to the control. Figure 7 shows that the hearts of AEV treated mice have decreased expression of TLR4 and caspase-1, components that increase inflammation and remodeling in the heart, indicating the AEVs dampen that effect. Figure 8 shows that AEV treated mice have higher expression of the complement inhibitor CR1, which lowers the expression of activated complement pathway genes, C3, C3aR1, and C4b, reducing inflammation. In Figure 9, we can see how AEVs altered hormone expression of the estrogen receptors in the heart compared to the control. This demonstrates a mechanistic benefit of AEVs. The protective effect of estrogen is also seen in the fact that females are less likely to develop myocarditis and have less severe myocarditis compared to males. In Figure 10, AEVs from two females and one male both decreased CVB3 induced myocarditis when given to male BALB/c mice suggesting that AEVs obtained from both male and female patients could be beneficial in treating myocarditis.

In conclusion, AEV treatment could provide an innovative therapy to reduce cardiac inflammation, by decreasing myocarditis severity, immune cell populations, inflammatory pathways, and by altering hormone expression as demonstrated in our animal model of CVB3 myocarditis. Some future studies include; determining whether AEV treatment can reduce or prevent DCM and chronic heart failure if given during myocarditis, and to investigate anti-inflammatory drug loaded AEV’s effect on myocarditis and DCM.

I would like to thank Dr. Wolfram and Dr. Ochrietor for directing the BRINC program. I would also like to thank my lab and Drs. Fairweather and Bruno for helping me during this amazing research internship. Thank you.