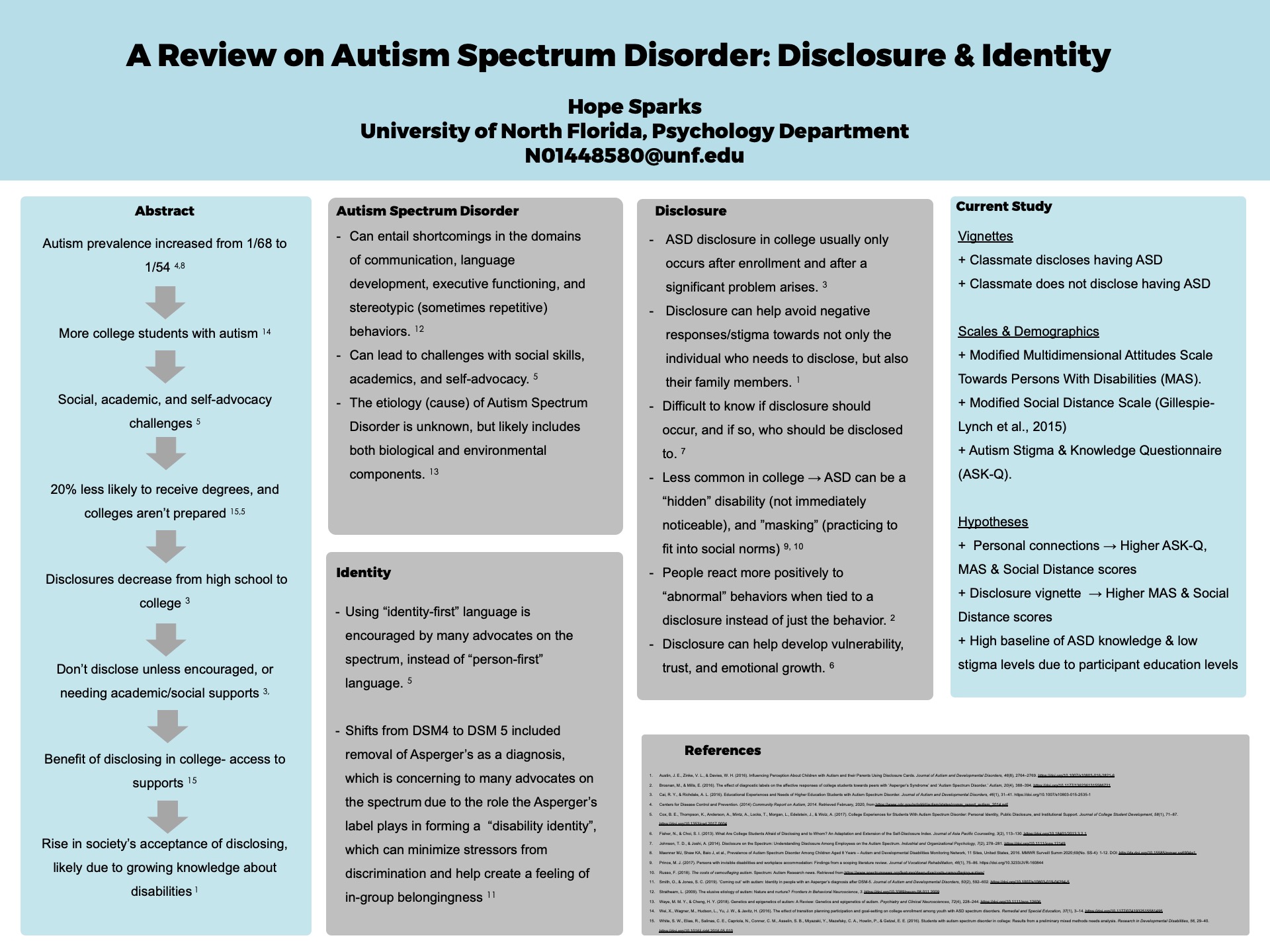 Within four years, prevalence of Autism increased from 1 in 68 students to 1 in 54 students (Centers for Disease Control and Prevention, 2014; Centers for Disease Control and Prevention, 2020), resulting in the number of college students with autism increasing (Wei et al., 2016). These students can face challenges with academics, social skills, and self-advocacy (Cox et al., 2017). Students with autism are almost twenty percent less likely than non-autistic peers to receive degrees (White et al., 2016). Colleges aren’t prepared on how to best support students with autism (Cox et al., 2017), and students aren’t able to get support from disability centers without disclosing to their university. In contrast, we see rates of disclosing autism decrease from high school to college (Cai & Richdale, 2016). Students don’t usually disclose unless encouraged to, or after a significant need for academic or social intervention (Cai & Richdale, 2016). It has been suggested that students on the spectrum may benefit from disclosing their diagnosis in college in order to receive social, academic, and transitional supports/interventions (White et al., 2016). Although there is no known reason, it can be hypothesized that this is due to bureaucratic processes or fear of stigma. There is a rise in society’s acceptance of disclosing, likely due to growing knowledge about disabilities (Austin et al., 2016), but it can still be risky to disclose in the workplace (Prince, 2017). The current study reviews the literature surrounding self-disclosure of a diagnosis for college-aged youth on the spectrum.

Hi everyone. My name is Hope Sparks, and I’m a current psychological sciences graduate student here at UNF. For my presentation I’m reviewing the literature on autism spectrum disorder, specifically on disclosure of autism, the role identity plays with autism, and my plans for my upcoming thesis study. So first off, autism is defined as a disorder that can involve difficulty with communication, language development, executive functioning skills (so prioritizing and time management) and stereotypical and sometimes repetitive behaviors. The cause of autism is unknown and has led to a pretty heated debate in the research field, and in pop culture. The diagnosis of autism has changed greatly, with the DSM 4 having 4 different disorders (autistic disorder, Asperger’s disorder, childhood disintegrative disorder, or pervasive developmental disorder not otherwise specified), but the DSM 5 removed the four and now just has Autism Spectrum Disorder. This change has led to many advocates on the spectrum feeling frustrated, especially with the change in the label of Asperger’s, since the names and labels of diagnoses play a role in creating a “disability identity”, basically a portion of someone’s identity that acknowledges disabilities as a facet of the self. Forming a disability identity can help minimize stressors from microagressions, and help create an in-group, belongingness feeling. Another aspect of identity and autism is the language used when discussing autism. The American Psychological Association encourages “person first language”, an example of that could be “A student with a disability”, but some autism advocates are encouraging “identity first language”, and the American Psychological Association has begun to consider that acceptable for journal articles/theses as well. An example of that would be “A disabled student”.

The diagnosis of autism spectrum disorder has increased quite a bit the past few years. In 2014 about 1 in 68 individuals were diagnosed with autism, but a recent study determined that it’s now around 1 in 54 individuals who are diagnosed with autism. Because of this, the number of students with autism who are enrolling in college has also increased recently. However, these students can face challenges with academics, social skills, and self-advocacy, and are almost twenty percent less likely than their non-autistic peers to graduate and receive degrees. In addition, most colleges aren’t adequately prepared or trained to accommodate students on the spectrum, and students are able to get accommodations or support from their disability centers on campus without first disclosing to their universities. But the rates of disclosing autism actually decrease from high school to college, and students don’t usually disclose unless their encouraged to do so by a professional or someone they trust, or if they have a significant need for an academic or social intervention. This could be due to bueracracy, or could be due to the fact that autism is a “hidden” disability (so it’s not immediately noticeable). I also believe that “masking” or the practice of fitting into social norms could play a role. If someone’s goal is to “mask”, then disclosure is the exact opposite of what they’d want to do. “masking” is also more common for women on the spectrum, and could possibly play a role in why more men are diagnosed with autism.

Researchers have encouraged that college students would benefit from disclosing so they can receive access to different campus interventions and accommodations, and because disclosure can help develop trust in relationships, vulnerability, and emotional growth. In addition, society is becoming more accepting of disclosing, likely due to growing knowledge about disabilities, but it can still be risky to disclose in the workplace. Although it should ultimately be an individual decision, disclosure is beneficial for family members because it can help avoid negative responses/stigma towards not only the individual who needs to disclose, but to related family members. The difficulty with disclosure of autism is that autism itself can make it difficult to know if disclosure should occur, and if it should, to who.

The reason I’m reviewing this literature is because it’s helping me decide how to complete my thesis, and I’ve decided that I’m going to be using a vignette-based study. A vignette is a short story that participants read and then answer questions about. The vignette will have two versions, but both are going to discuss a classmate of the participant who is exhibiting what are called “stereotypical” signs of autism (for example, one seen a lot in media is “stimming”). One version has the classmate disclose to the participant that they have Autism. But in the other version the classmate won’t disclose. Once the participants read that I’m hoping to have them complete some scales on attitudes towards individuals with disabilities, social distancing, stigma, and knowledge of Autism. I’m hypothesizing that participants who have a personal connection to autism will score higher on the knowledge, lower in stigma, and will score more positively with social distancing and attitudes than participants who don’t have personal connections.  I also believe that the vignette condition where the classmate does disclose having autism will have more positive attitude and social distance scores when compared to the version without a disclosure. Finally I believe that since my participants will be undergraduate college students, there will be a higher baseline of knowledge, and less stigma levels overall when compared to the levels on the scales. Thank you for your time! Please feel free to email me if you have any questions!

PrevPreviousCelebrities in Rehab: Who is more at risk?
NextFlorida mangroves show no evidence of thermal acclimation of leaf respiration: implications for coastal carbon cycling and future climateNext