Self-Monitoring Differences in Spirituality vs. Religiosity: Intrinsic Orientation as Mediator 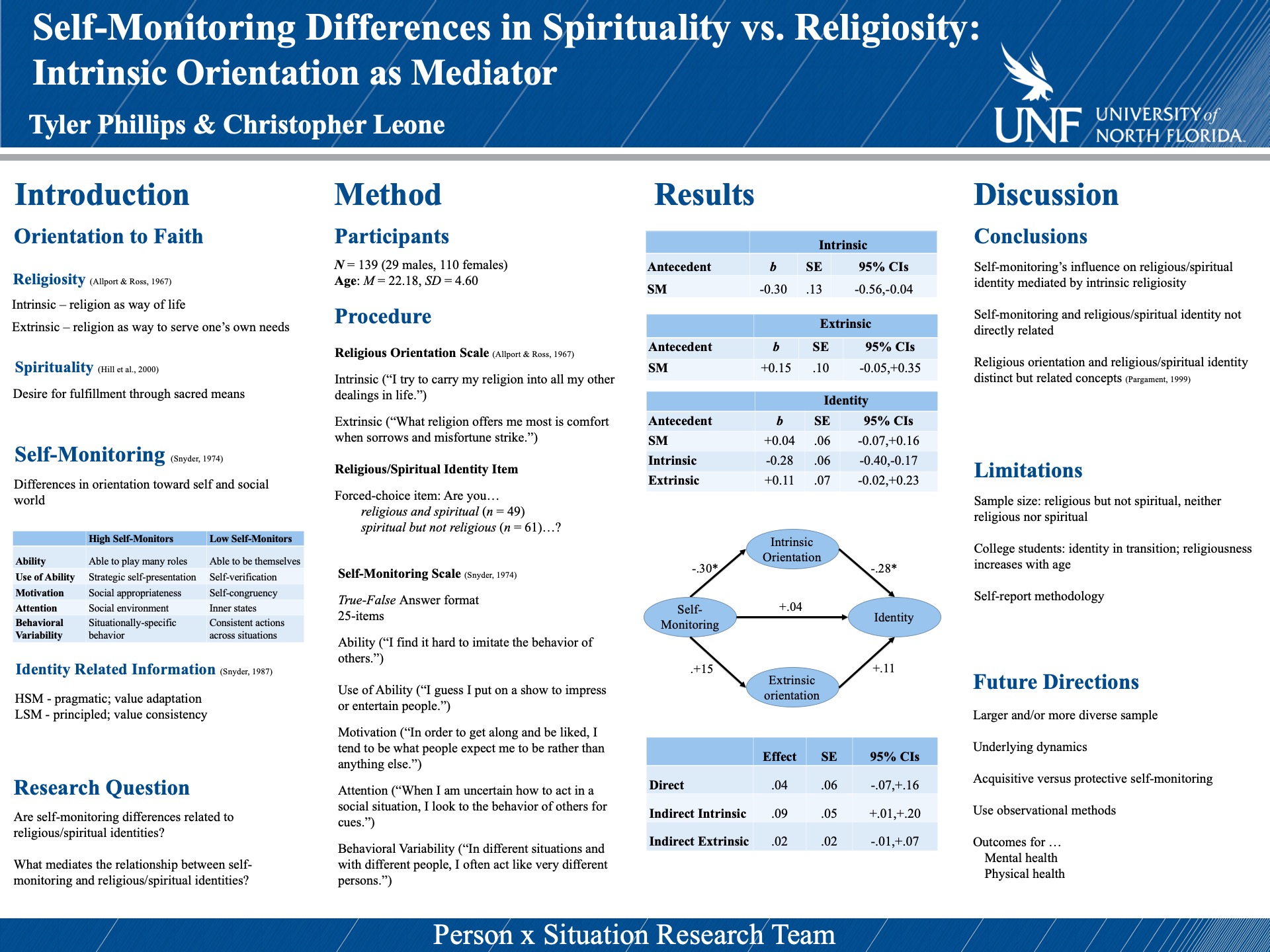 In our study, we wanted to look at self-monitoring differences between spirituality and religiosity. We chose these two concepts because they both are related to one’s sense of self and they both also deal with how people orient themselves to their world. Within orientations to faith there are two major orientations: religiosity and spirituality. Within religiosity there are two other well-known orientations: intrinsic orientation and extrinsic orientation. Someone with an intrinsic orientation is someone who is going to devote a lot of their life to their religion. Some examples of this would be a priest, nun, or any other religious figure. Someone with an extrinsic orientation looks to see how they can benefit from religion. So, they may look for a sense of community, relationships, or stress relief. Moving on to spirituality, the biggest difference between spirituality and religiosity is that for someone to be defined+ as spiritual, they do not necessarily have to attend religious institutions such as church. They often practice their beliefs in a more independent manner than those who are religious. Spirituality is very similar to intrinsic religiosity in the sense that both deal with a strong belief in a higher power. It is important to note that being religious and spiritual are not mutually exclusive of one another. One can be religious and spiritual, one can be simply religious, and one could just be spiritual. However, with our next concept, it is the opposite. With Self-monitoring you are either one of two types: a high self-monitor or a low self-monitor. High self-monitors prefer to be the right person at the right time for every situation. Low self-monitors prefer to be themselves across all situations. For our research we wanted to explore two questions regarding these concepts. We wanted to see if there was a relationship between self-monitoring and religious and spiritual identity and we wanted to see what the reason behind this relationship might be.

PrevPreviousDietary and Body Mass Thresholds for Reproduction in Grasshoppers
NextFood Insecurity as a Continuum: Investigating the Emotional Well-Being of ParentsNext

1 thought on “Self-Monitoring Differences in Spirituality vs. Religiosity: Intrinsic Orientation as Mediator”