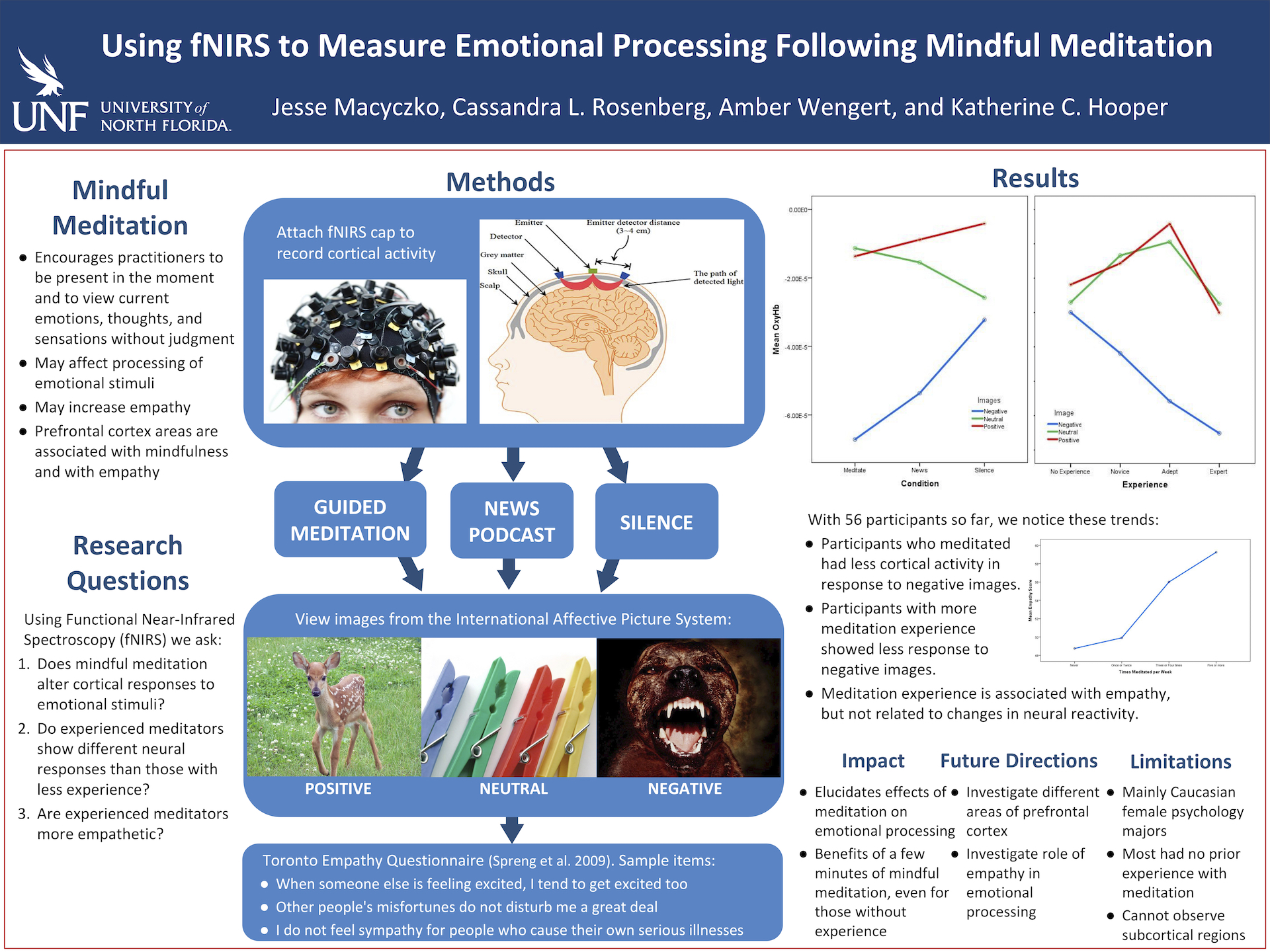 Mindful meditation, an exercise which encourages its practitioners to be present in the moment and to be aware of their current emotions, thoughts, and sensations, has been shown to affect the processing of emotional information (Sobolewski et al., 2011) and to increase empathy (Tan, Lo, & Macrae, 2014). The prefrontal cortex has been implicated in these processes (Seitz, Nickel, & Azari, 2006). We sought to investigate the neural mechanisms which underlie how mindful meditation affects emotional processing and to determine whether any changes in brain activity could be linked to changes in empathy.

Participants in our experimental group practiced mindful meditation for ten minutes. Those in the control groups either listened to an unexciting newscast or sat quietly for ten minutes. Next, participants in all conditions viewed a series of emotionally valenced images from the International Affective Picture System (IAPS) (Lang, Bradley, & Cuthbert, 2008). As they viewed the images, activity in the prefrontal cortex was monitored with functional near-infrared spectroscopy (fNIRS). Following the presentation of the IAPS images, participants completed questionnaires and inventories that measured empathy, previous experience with meditation, and personality traits.

As well as differences in empathy between participants who meditated and participants who did not, we expect to discover any variations in patterns of prefrontal cortical activity during the viewing of positive, negative, and neutral imagery. We hope that our results will elucidate how mindful meditation affects emotional processing and the development of empathy, and to determine whether certain personality traits, social conservatism, or lack of sleep may predict neural and behavioral responses to mindful meditation.

The purpose of this experiment was to see how mindfulness meditation affects emotional processing using Functional Near-Infrared Spectroscopy, also known as fNIRS. Mindfulness meditation is a practice in which the practitioner brings focus to their thoughts and emotions without judgment. They bring attention to what they are feeling and simply let the emotions pass without dwelling on them. This practice may have effects on emotional processing and empathy.

fNIRS is a type of technique that measures brain activity by monitoring the oxygenated and deoxygenated hemoglobin in the prefrontal cortex. The fNIRS caps were attached to the participants. Each participant was then randomly assigned to one of three conditions in which their cortical activity was recorded. The experimental condition consisted of the participants listening to a guided meditation for ten minutes, while the two control conditions consisted of participants listening to a news cast or sitting in silence for ten minutes. Once, the task was completed, they would view emotionally valenced stimuli consisting of positive, negative, and neutral images. Cortical activity recordings were then stopped after viewing the images, and a survey was given to the participants that included an empathy questionnaire and questions regarding their experience with meditation.